I’ve been working on my survey of what I love most about Detroit, which is to say, my walk down memory lane. Although I’ve got seven single-spaced pages written, I’ve only barely scratched the surface. I like to be thorough, and so I’ve realized that perhaps I ought to publish this adventure that Adele and I took little by little.

It’s been a joy to share my memories of childhood and I’ve learned some things along the way, as I’ve thought and reflected in conversation with the wise and thoughtful people who I have the benefit of knowing. So here it all is together, past and present and a little sprinkle of future throughout.

Detroit is where I spent my days as a kid. Detroit is where my heart opened wide to take in a world of fun experiences and where I learned that life is meant to be thoroughly enjoyed. I may have left Detroit long ago, but as I’ve delved into this project, I’ve realized more than ever before just how much Detroit lives on in my heart. 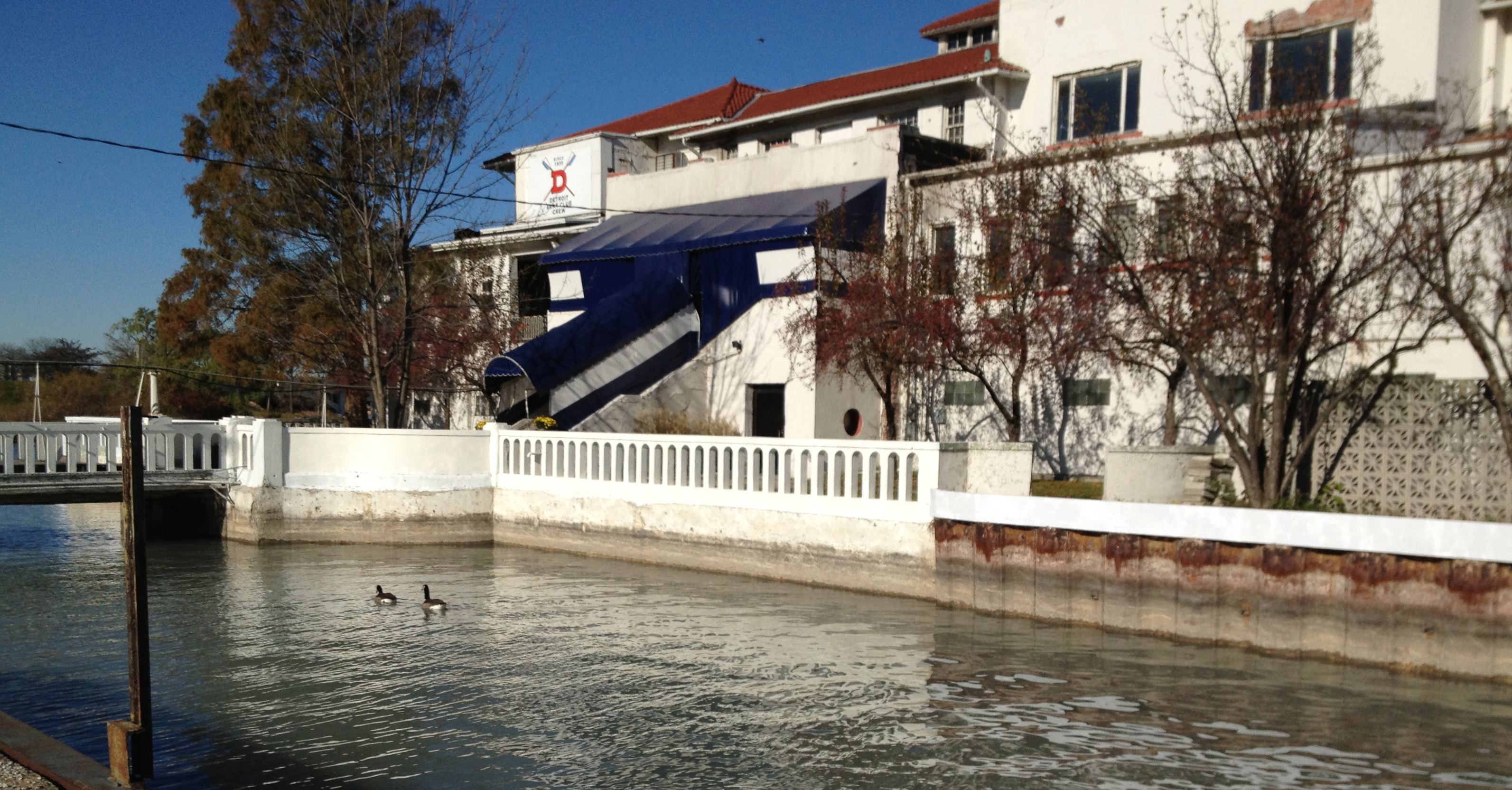 We were members of the now shut down Detroit Boat Club . I spent most afternoons there poolside. I loved the mints in the dining room which I’ve never had any place else. There was a bridge over the middle of the olympic sized pool and I would trek across it to the snack bar to get a nutty buddy ice cream cone at the snack bar, yum. It was always fun to see what superhero would be painted on the bottom of the kids pool at the beginning of pool season. I’ve never been a thrill seeker, so I was willing to jump off the high dive, but never in a million years would I have gone head first. From the side of the pool, let alone from ten meters in the air (I’m guessing on that height, because I wasn’t able to measure it myself)! Oh and that mote that guests had to cross over to enter the clubhouse? Our dog loved to paddle around in it much to my youthful delight. The super-fastidious adult who I’ve become would not take nearly so much pleasure in the aftermath of a real doggie paddle in the Detroit River – ick!

Sailing has been a part of my life since I was born, thanks to both my parents. My mom was one of the first women to join the elite group of yachters at the Detroit Boat Club – they didn’t let gals join until 1975!!! – and a friend of ours was one of the gutsy gals who changed the sign on the Belle Isle bridge to be gender neutral: “Gentle Yachters, watch your wake.” It all happened on a dark and stormy night, and makes a great story to be retold year after year. It’s best when enjoyed over a slice of Niki’s Pizza and Vernor’s ginger ale (which I’m pretty sure only a Michigander knows how to sip gingerly, pardon the pun). 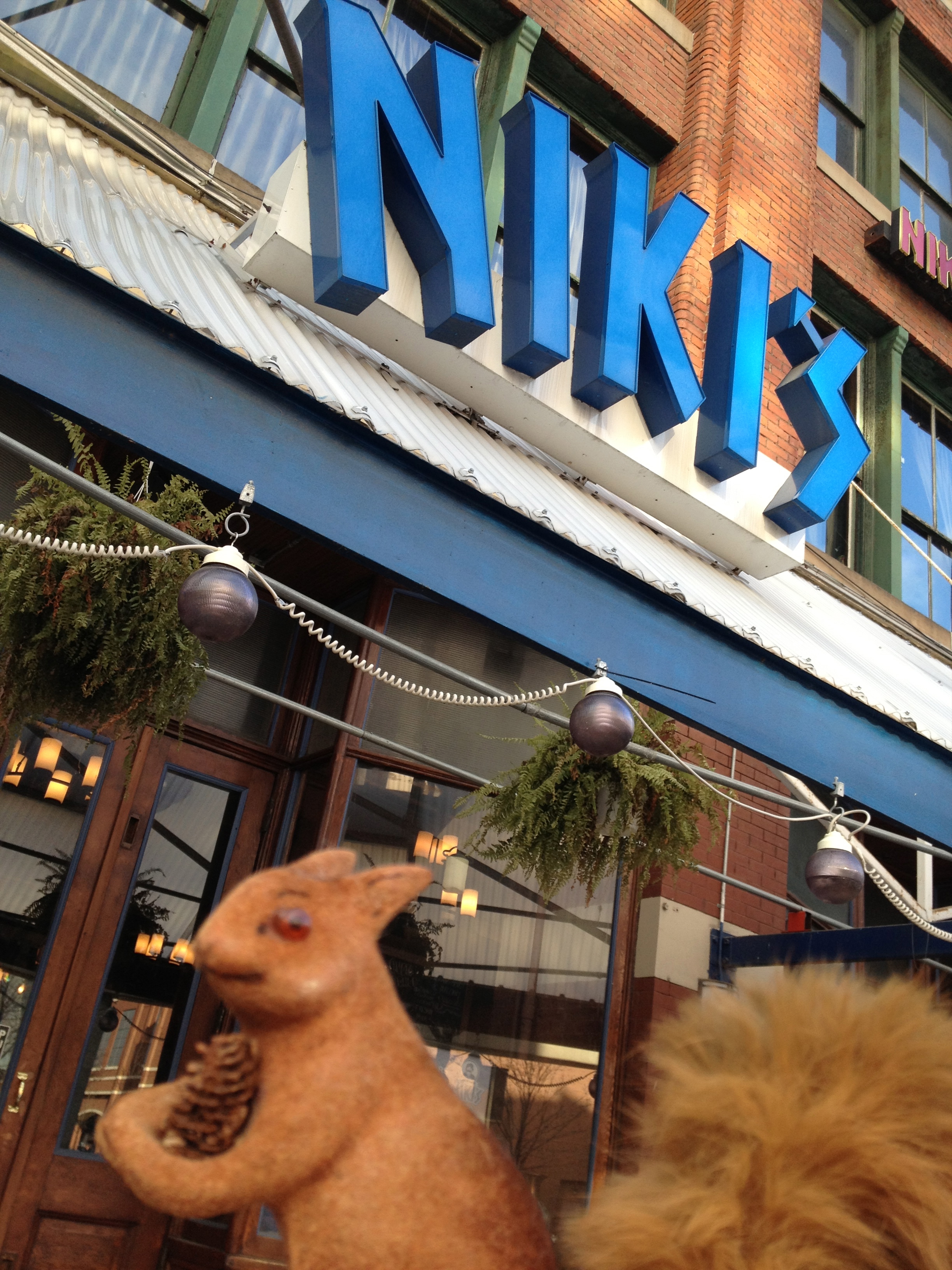 But guess what?! Vernor’s is under new ownership, just like Stroh’s beer. I haven’t tried either, but I’m guessing like so many things, it won’t be quite the same (could be the aging effect on my taste buds or minuscule yet important changes in how its made, who knows). Ah, the constancy of change! Talking about change, DBC folded long ago. Which is sad on many levels, mostly though, because the kid in me is wondering about those mints…

My mom joined the Detroit Yacht Club once I’d left for college. She missed sailing on the Detroit river and was quite involved in the Flying Scot program there for a good while (she suffered a couple accidents which left her less inclined to race as often). Now we have a fun place to visit on the Belle Isle, and so our little Detroit excursion started there. But not at the members-only-yacht-club, no we began with a place much more in step with the Detroit of today, and what I hope will be the future of Detroit: the newly re-opened Belle Isle Aquarium . 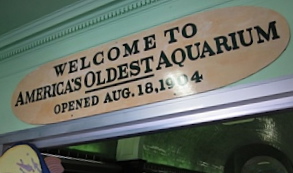 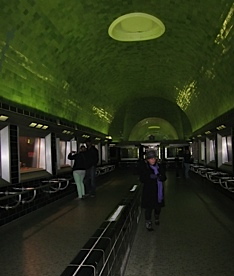 It’s a beautiful facility, which I think captures the spirit of Detroit in its burgeoning days, back when I imagine that it was striving to win the honor of being commonly referred to as the Paris of the mid-west (or something like that). Here’s what I think is really cool about the Aquarium: it’s now being run completely by volunteers. You know, those good Detroit people, I mentioned. There is also a lovely flower conservatory overlooking a lovingly tended garden. 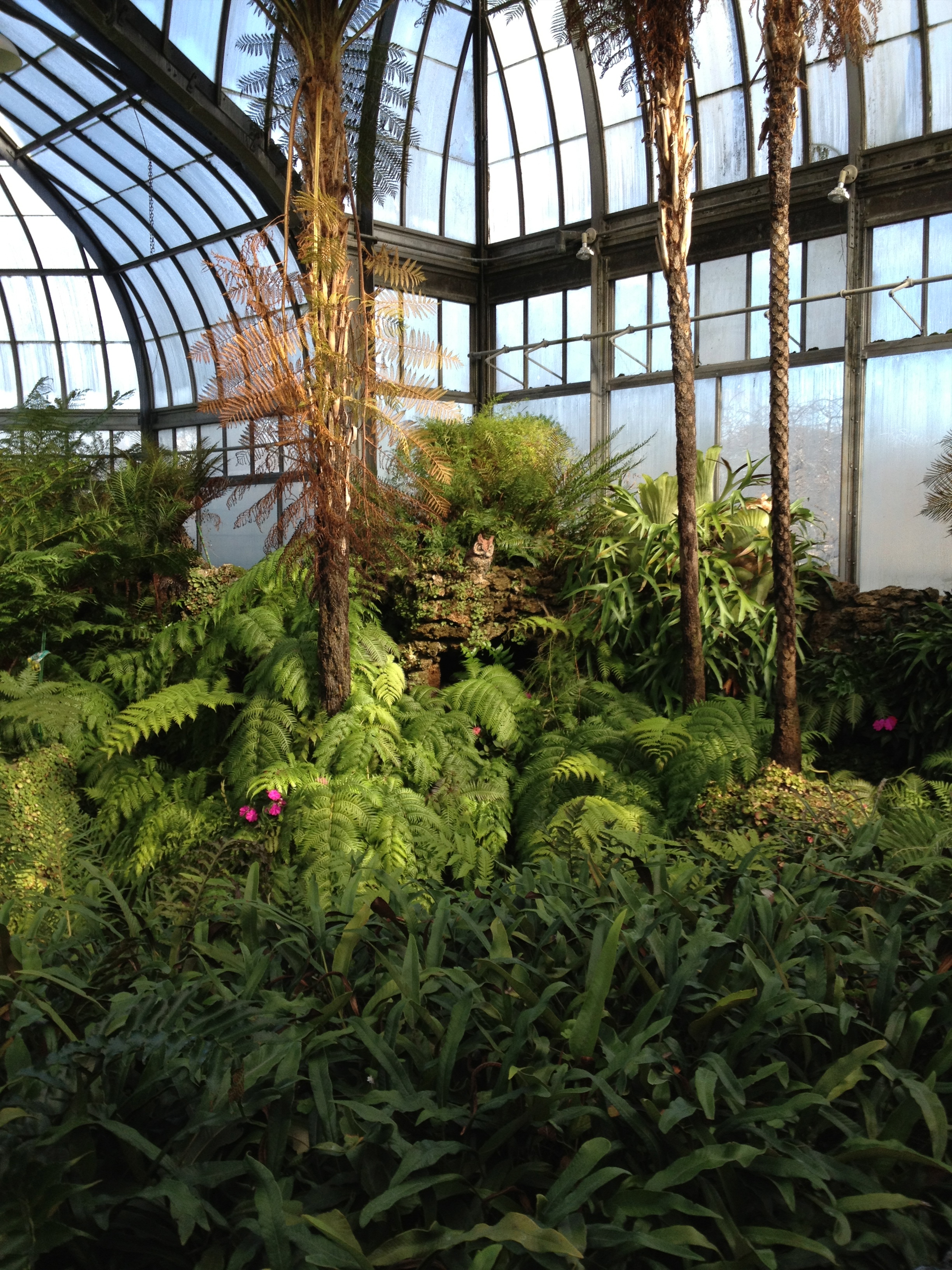 If you sit on the benches (as I did for a milk-break) you will enjoy a lovely view of the Detroit skyline off in the distance with the garden in the foreground. You’ll have to either take my word for it or go and sit on that bench yourself, my hands were full of baby.  I must confess that I spent precious little time in the aquarium because I was taking a few photos of my favorite Belle Isle sights and by the time I returned, our little man had made it quite clear that he was not a fan of the fish. He much preferred playing in the leaves out in the garden, and really who can blame him for that? We did have the benefit of seeing the caring volunteer forces in action as we visited the aquarium on the very day that the koi were being moved to their indoor pond for the winter months. 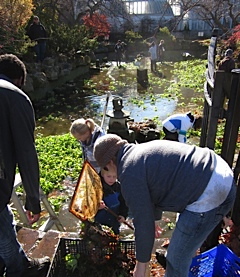 While my little boy was getting freaked out by the fish, I wanted to show Adele the beautiful Detroit skyline, and as far as I know the best views are from Detroit’s pretty island park.  (see above)

I was also eager to show Adele my inner child’s version of a thrill: the giant slide. 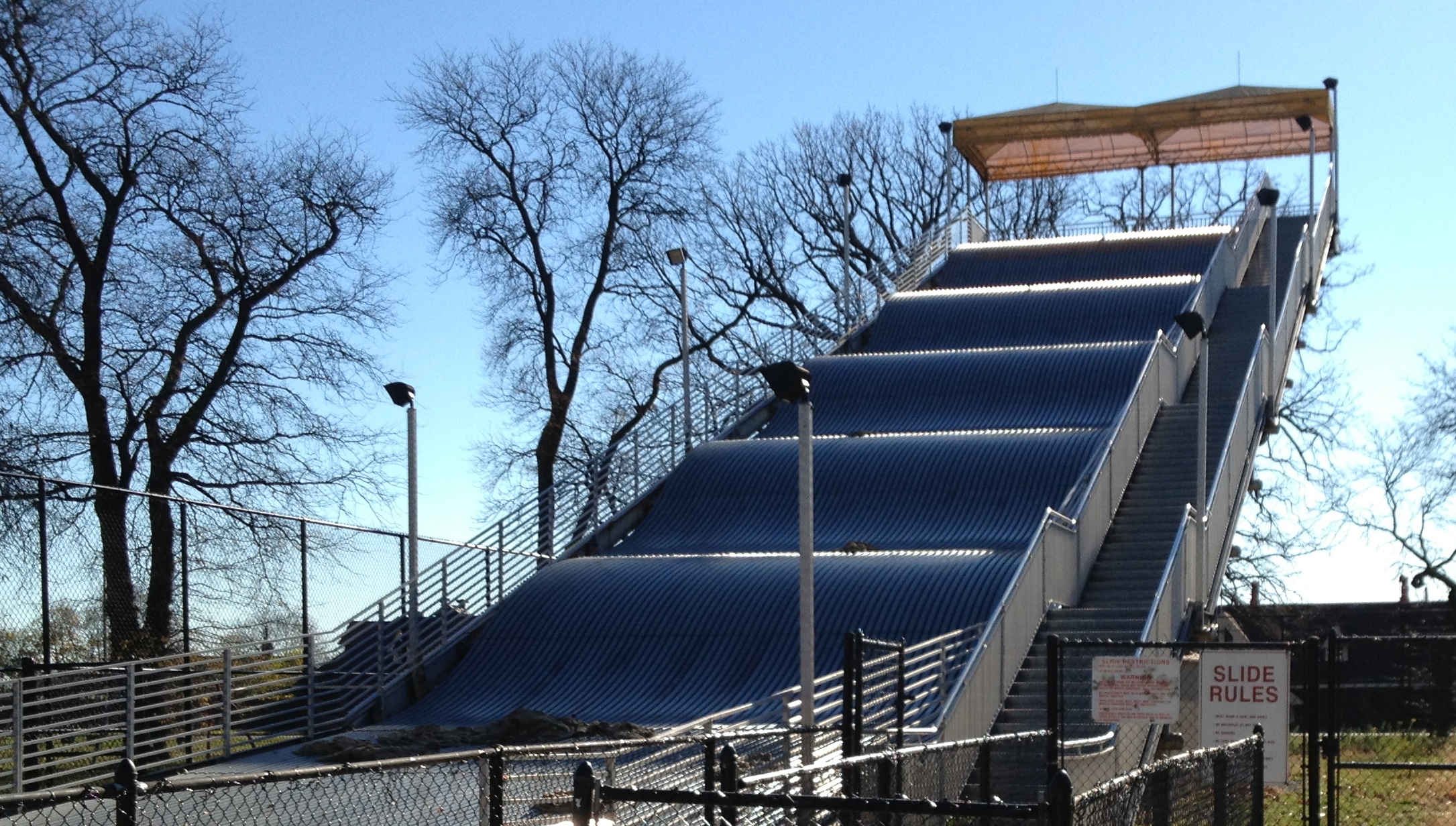 Of course it looks smaller now, and I remember some elements differently. But it’s still big, and being that I’m not much of a thrill seeker, once was enough for a lifetime of memories.