When I first met Adele I was so eager to show her around town and let her in on what I consider the most fundamental elements of human society.  Sadly, I have precious little time for such escapades these days.  It is a great credit to Adele that she’s been so patient with me.  (For all I know, I’m moving at a squirrel’s pace.)  One of the first places that I wanted to show Adele is one of my very favorite places, Castle in the Air.  Well, we finally did it!  Although it was a quick visit and now that I’ve finally organized the photos and given some thought to what I’m going to share I’ve realized that I only know enough to tell my own story of our local creative sanctuary.  I don’t want to spread mis-information about a place that is so dear to my heart so curious readers may be left with many unanswered questions at the end of this post.  I implore each and every person to visit Berkeley’s little slice of magic for themselves.  I have no doubt that every person who is aesthetically inclined will find a little something of inspiration there.

I don’t know what first brought me to Castle in the Air, but I do know that I was caught up in the hustle and bustle of establishing my professional life and that I had little space for new creative projects.  I have always sewn and that was most certainly my main creative outlet at the time.  Given my stifled imagination, I was rather overwhelmed the first time I entered the shoppe.  But I was also completely romanced.  I used to visit and make tiny purchases just to soak in all the beauty.  It is literally tucked in every corner and atop every surface as this lovely phoenix demonstrates (I had to climb up on a ladder to take his photo.) 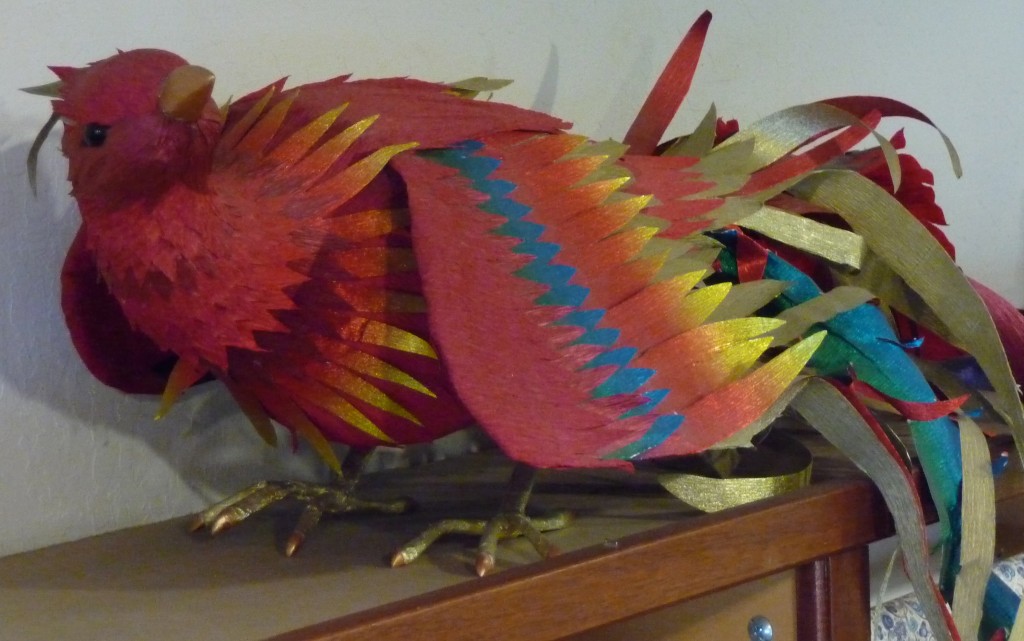 Eventually as my creativity was begging for more expression I indulged in a class or two.  I learned how to make a lovely evergreen tree out of wire and beads.  From that technique I eventually made one out of white pipe cleaners.  And then I came up with the idea to make this one for a Christmas countdown activity (the ornaments are from my husband’s childhood and given that this year may be the first year that our boy relishes counting the days till Santa’s visit, the overall countdown scheme isn’t yet firmly established.  But at least now I’ve got the tree). 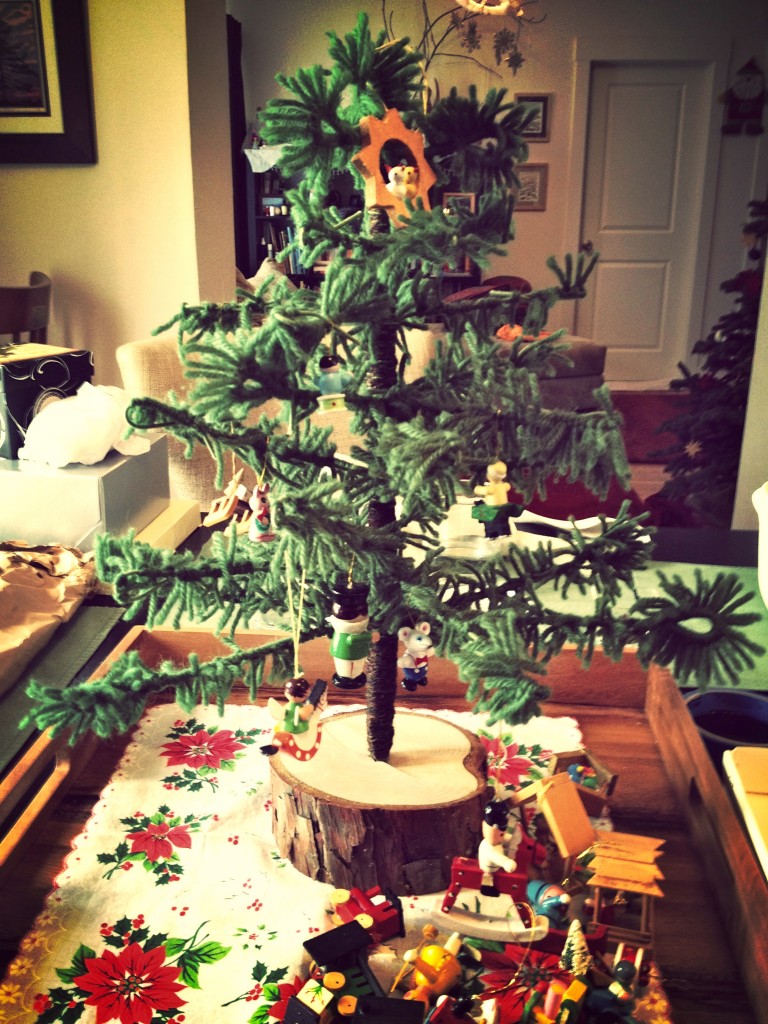 The next class that I took was the crepe paper flowers class with Anandamayi Arnold (who has regular offerings at Tail of the Yak) and Aimee Baldwin.  Sheesh, those two can do amazing things with paper!  Although, the paper itself does deserve some credit.  It’s absolutely lovely.  Karima, the store’s owner and visionary, travels to Europe every year to make her purchases of so much of what appears in the shoppe.  The crepe paper is made in a small European factory which still exists because of Karima’s patronage.  The colors are so alluring, time and again I have found myself tempted to purchase crepe paper with the same risk of impulse that I’d formerly reserved for fabric alone.  I had a lovely pile of paper in home and not a clue what to do with it.  So I took a class.  Over the years I’ve made some lovely flowers, many of which have been gifts.  Daniel, the friendly shopkeeper and ridiculously talented wielder of scissors who I’ve been seeing for many a year, got into a routine of making garlands a few years back.  One day he gave me his formula and I was off and running.  John, who I first came to know by his whimsical gnomes and who I eventually had the pleasure of learning from – but now I’m getting ahead of myself, at a certain point made some large scale flowers using thick floral wire for the framing.  I was inspired to do the same for my son’s nursery.  Every time my boy lies down to get his diaper changed, he sees this.  (Some of them materials were purchase at Tail of the Yak, another Berkeley treasure). 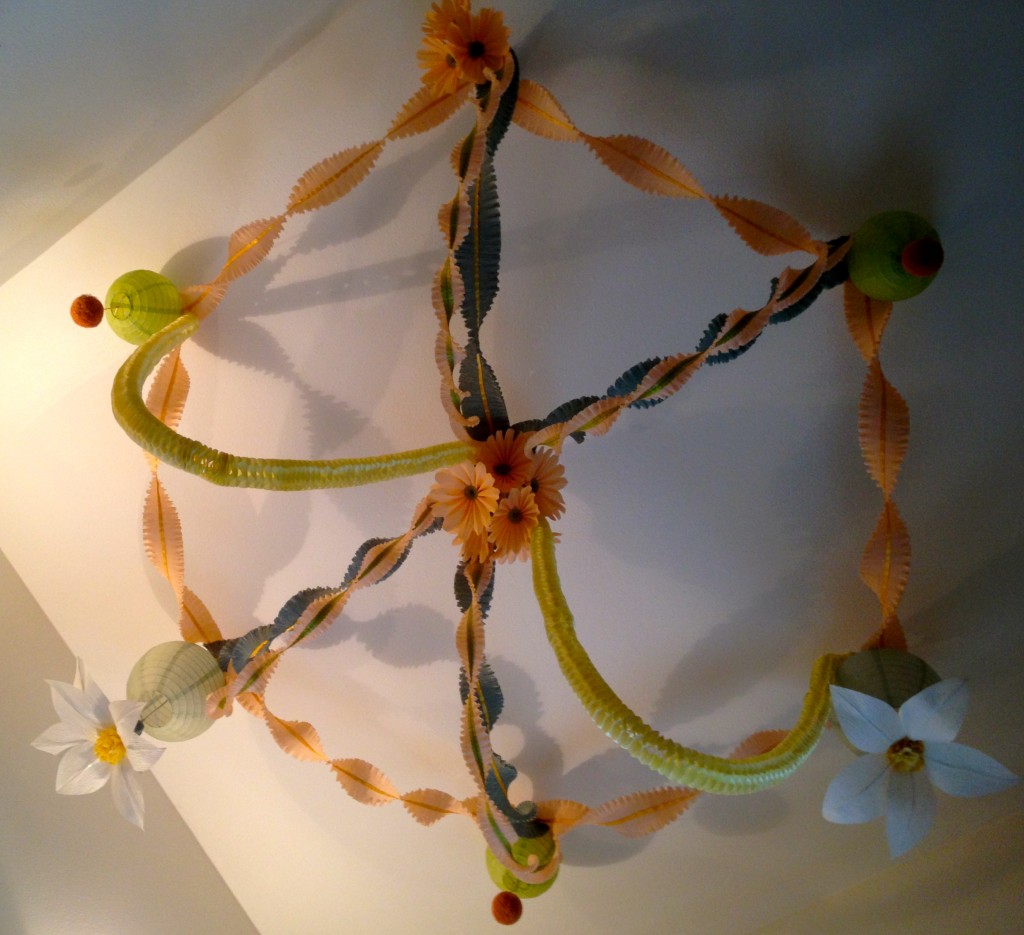 Some of the crepe paper beauties on display during our visit: 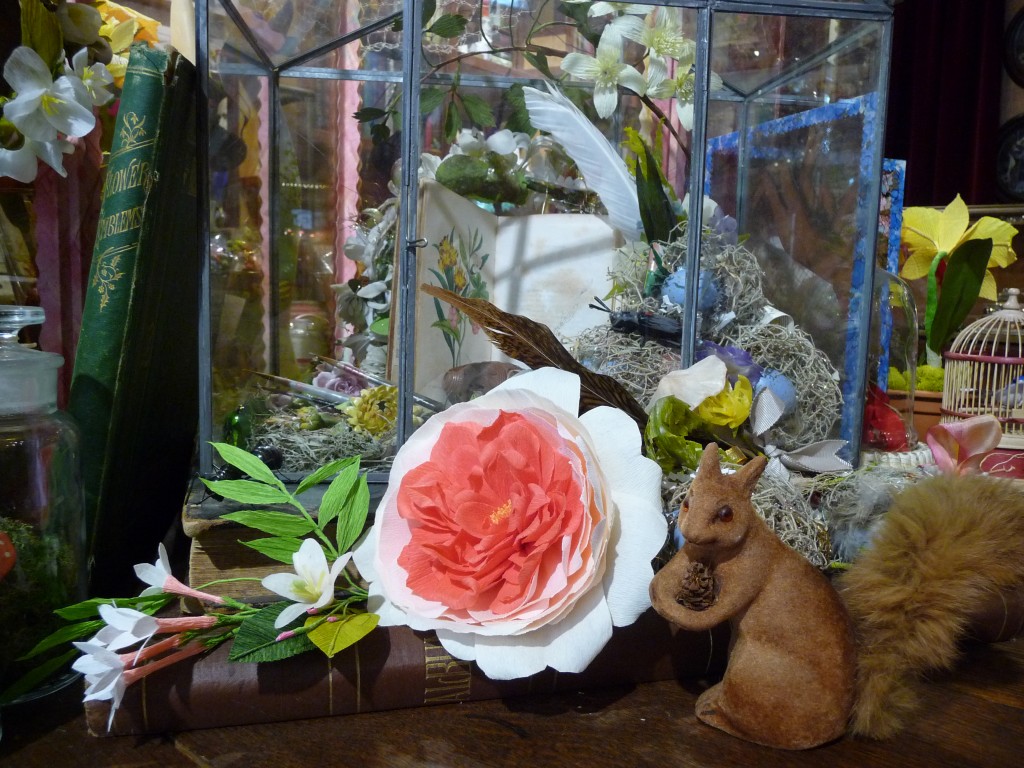 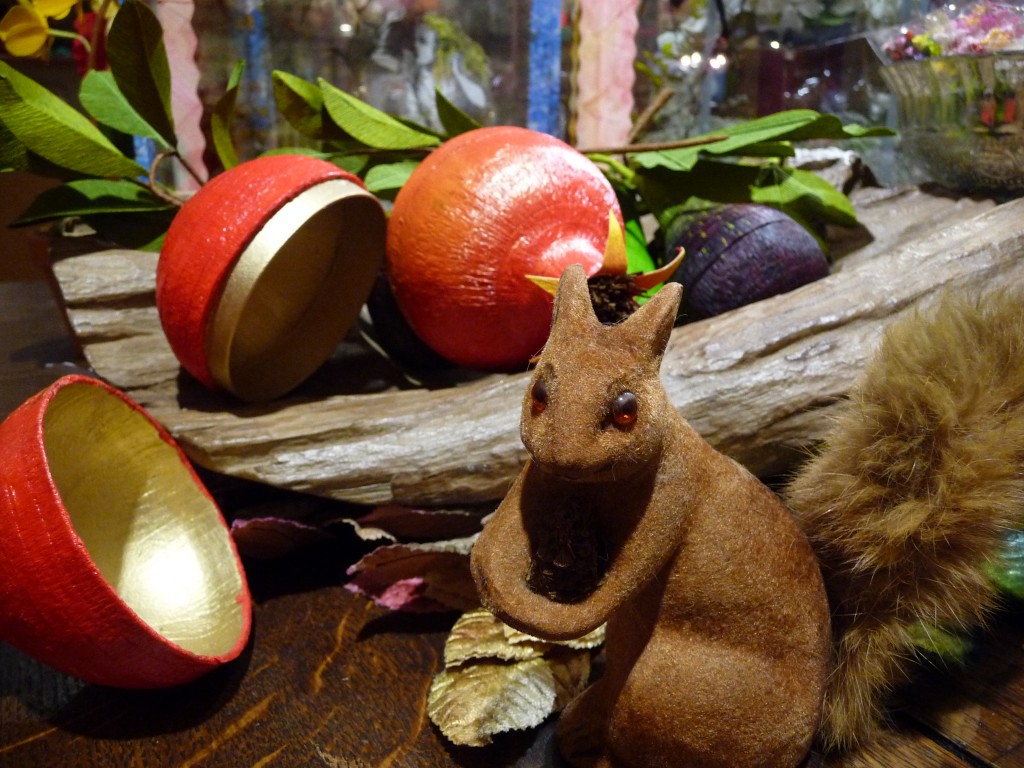 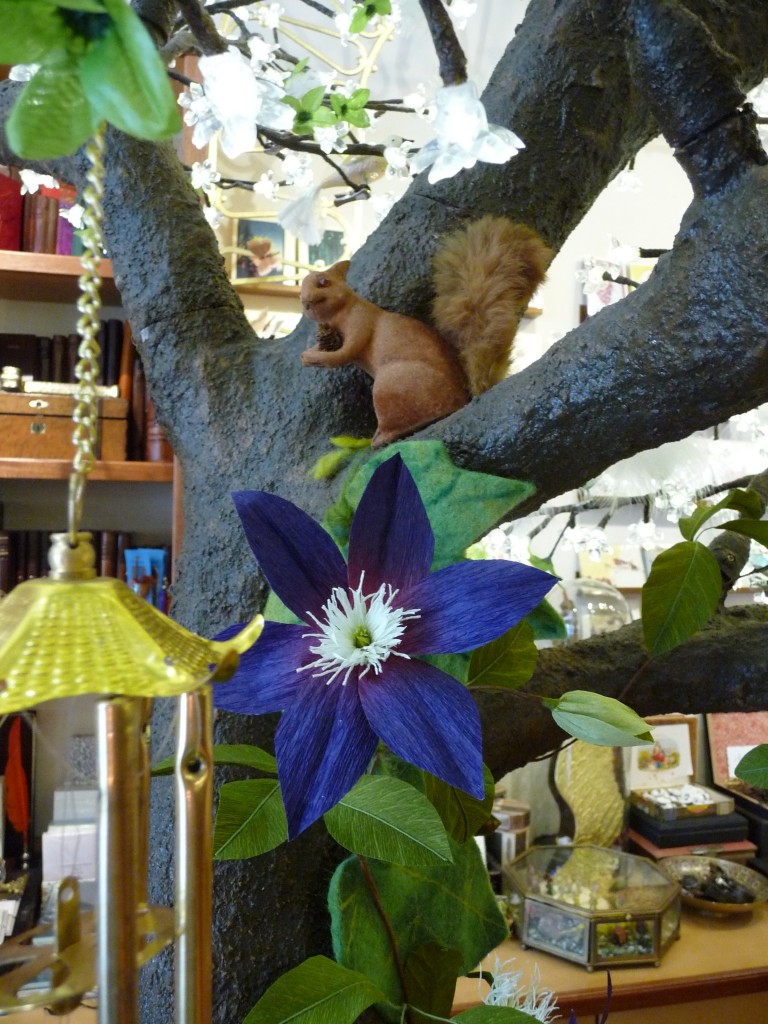 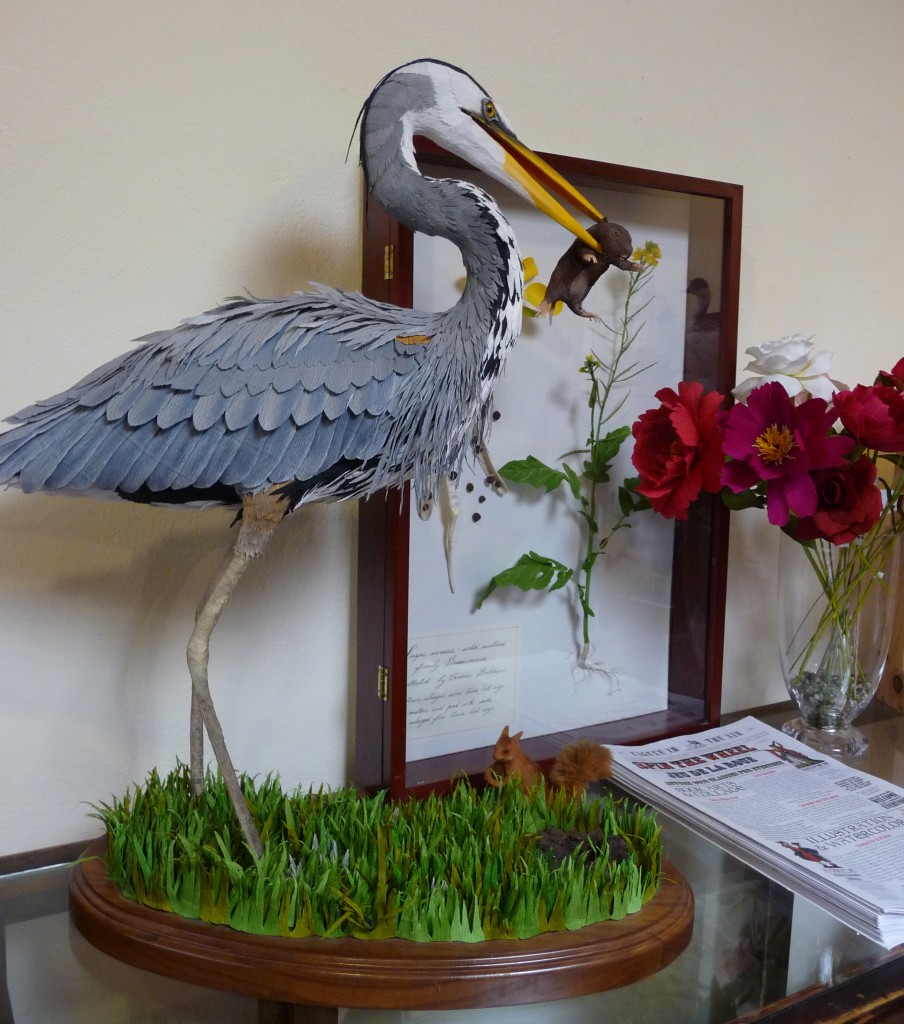 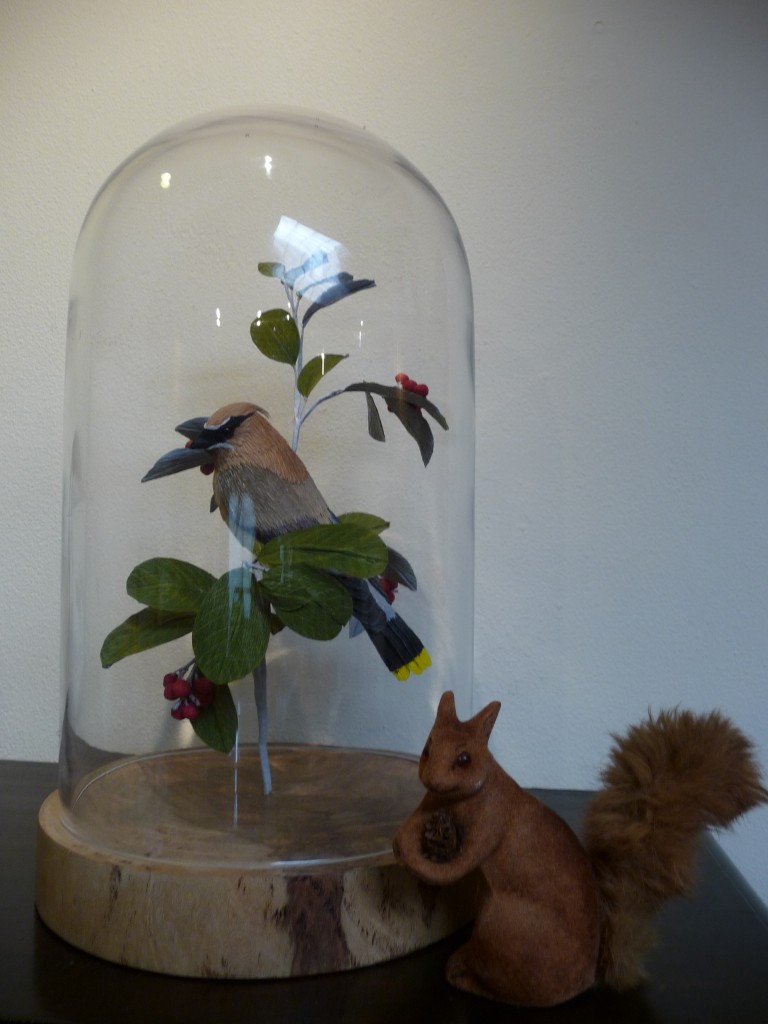 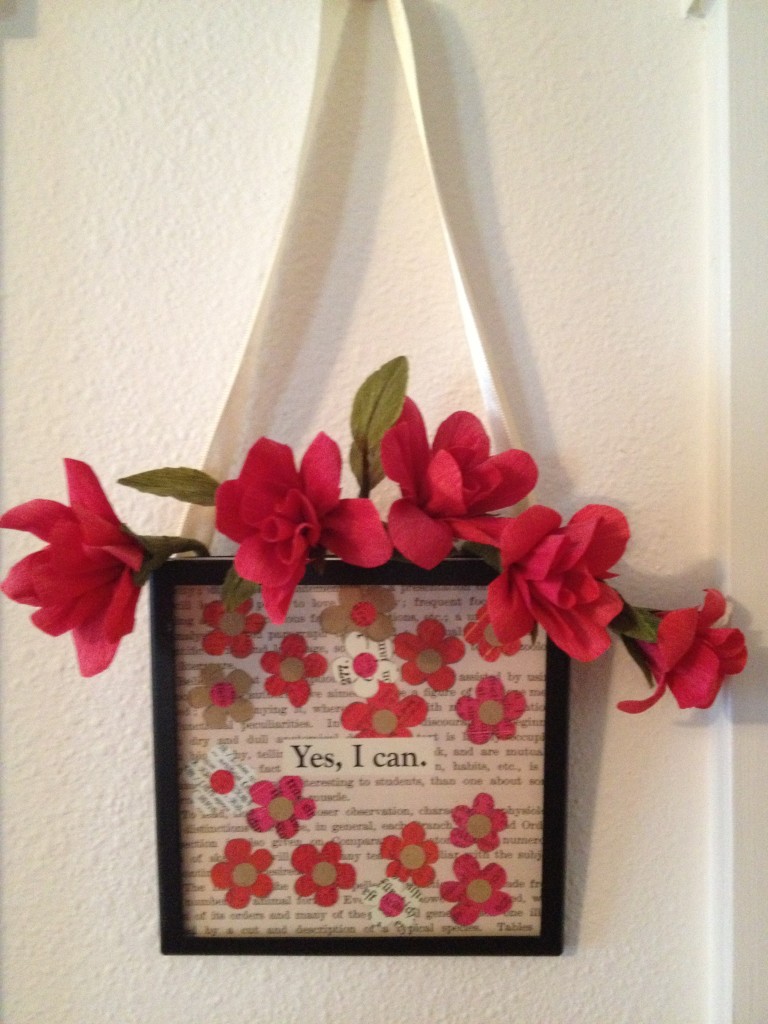 The red roses from my first class made a perfect frame for this little inspirational picture that somebody gifted me.

Castle in the Air now hosts another talent with crepe paper, Lynn Dolan.  I have yet to meet her but I must say that it was such a pleasure to see another interpretation of the material.  Which brings me to what is perhaps the most important aspect of Castle in the Air, the community that it hosts.  If you are not completely distracted by the feast for your eyes, or lured in by the gorgeous tree with illuminated flowers, crepe clematis, and all varieties of flora and fauna as a gentleman was while Adele and I were present, upon entering the store look up and you will see what Castle in the Air is really about:  A Studio for the Imagination.  Once I began taking classes at Castle in the Air I began to see the true substance of the store, that lies beneath its bevy of beauties: a nurturing home for many artists.  I believe that one of Karima’s primary reasons for creating the shoppe was to carve out a personal space for her own craft of preference, illustration.  But as all good ideas come to full bloom, so did hers.  She is decidedly understated in her approach to business and community building while being quite sure of her desires and so what has materialized is heavy on the substance:  regular class offerings, remarkably high quality materials for most any creative endeavor, a close-knit community of creative people, and Dromedary press. 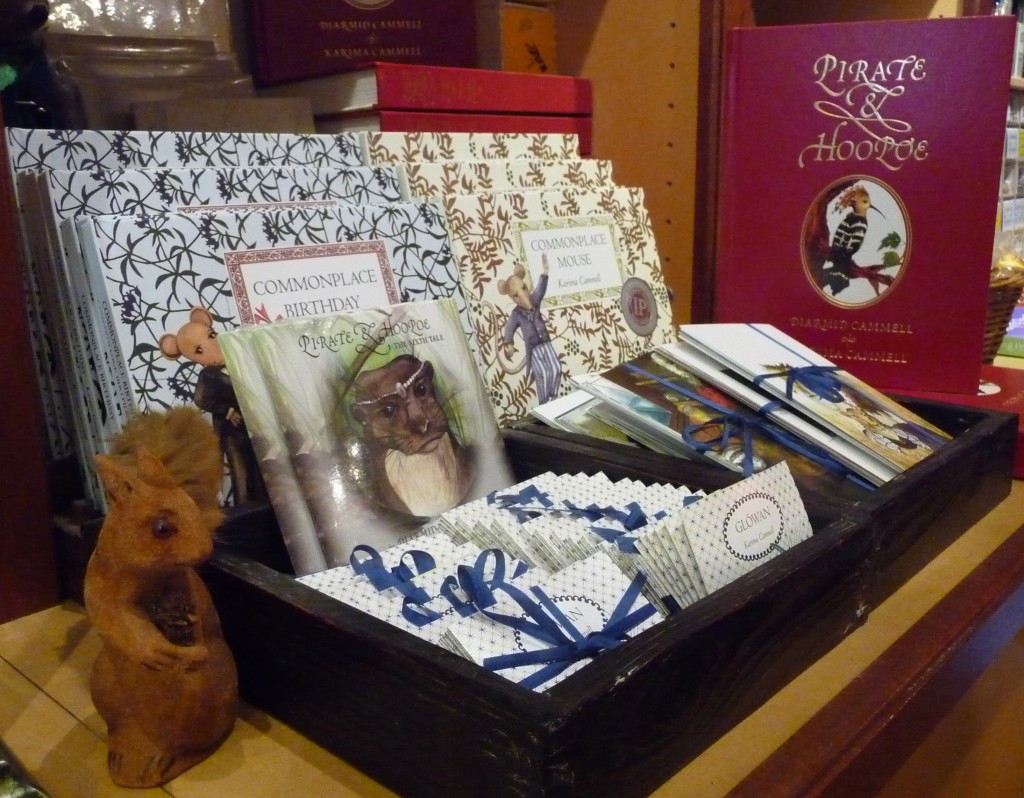 John McRae is one of Castle in the Air’s long standing talents.  When I first found the shoppe I came to know him through his beautiful pieces of whimsy which were for sale.  But I eventually had the benefit of taking a class with him in which we each made a little animal figurine using wire and cotton along with paints and specialty papers (dresden, crepe, and German pictures).  It was right around the time that I was getting to know my husband and since he’d told me that he was a mountain goat, it seemed like a good idea to make one myself.  Here’s the little guy who was inspired by my guy.  He’s fun to have around. 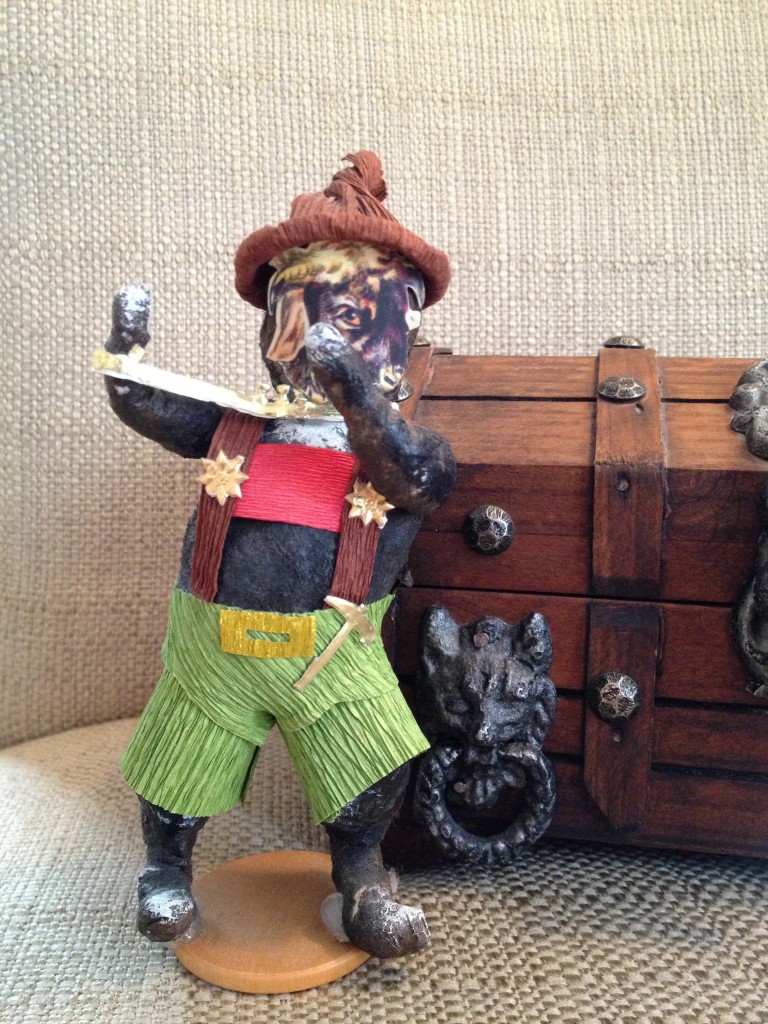 It must have been a year or more before taking that class that I visited Castle in the Air when I was applying some fung shui ideas to decorating my room.  Mostly I was focused on my relationship corner.  My favorite shoppe had the perfect thing, some pretty little birds and a snug little nest.  Now that I’m now happily married, those nesting birds grace our living room and I painted them for our wedding thank you cards. 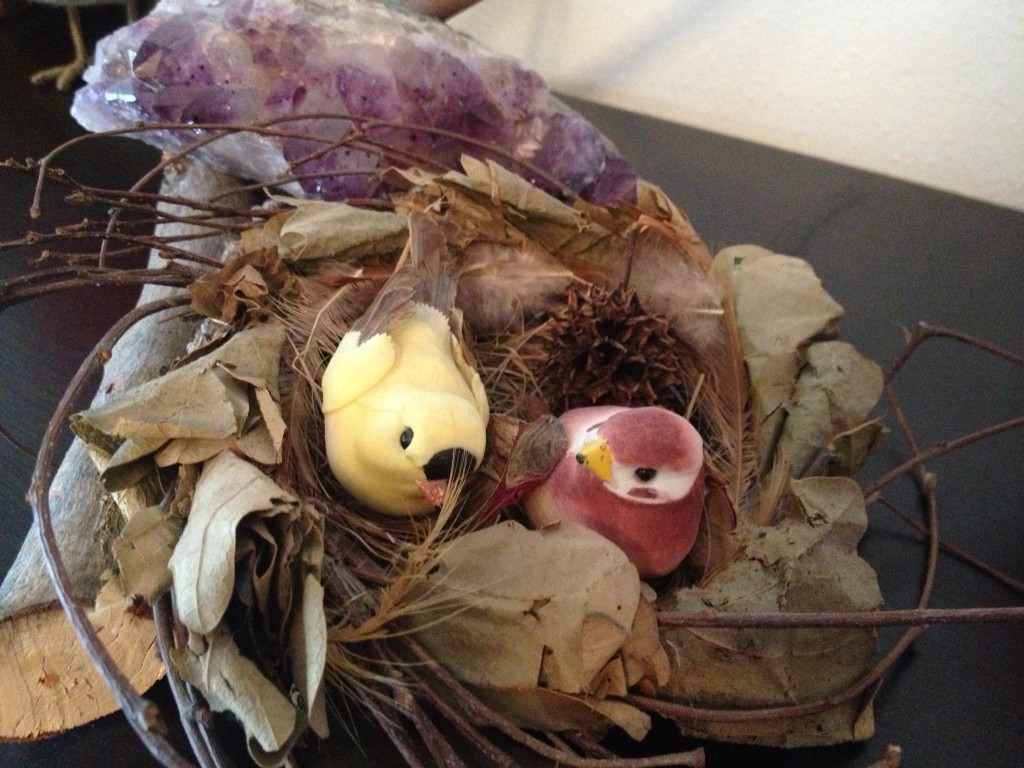 I don’t remember what brought me to ask, but one day Daniel graciously demonstrated how to make a paper doll chain.  I’ll never forget how quickly he whipped out a pair of imposing scissors, and fashioned a cute little chain of dollies.  He agreed to demonstrate the process for Adele for a little walk down memory lane.  The thing about Castle in the Air is that it truly is a studio for the imagination and so it’s constantly changing.  Daniel only remembered the initial instance once we’d gone through our replay, and to be honest, I still have no idea why I asked him about paper dolls in the first place. 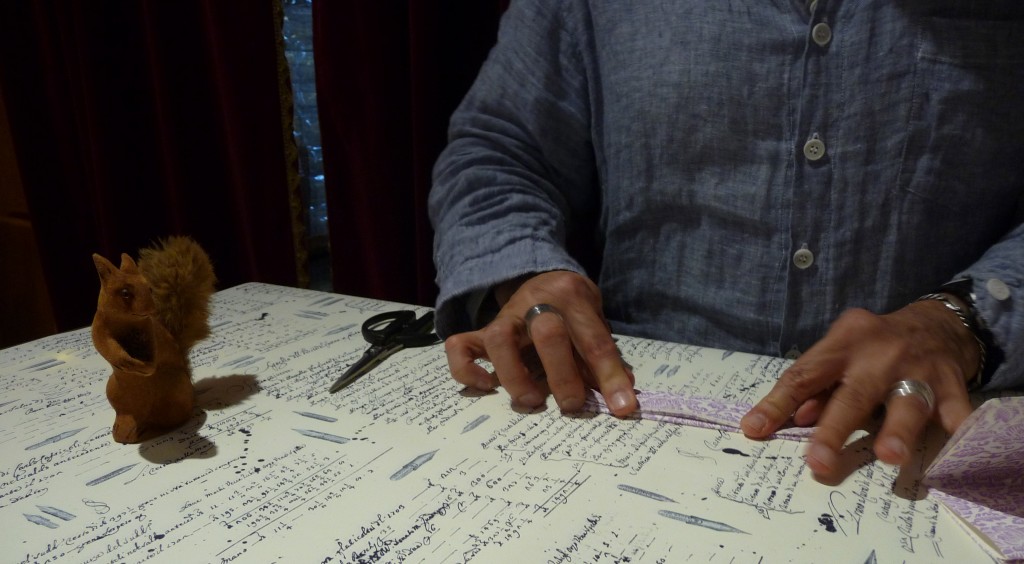 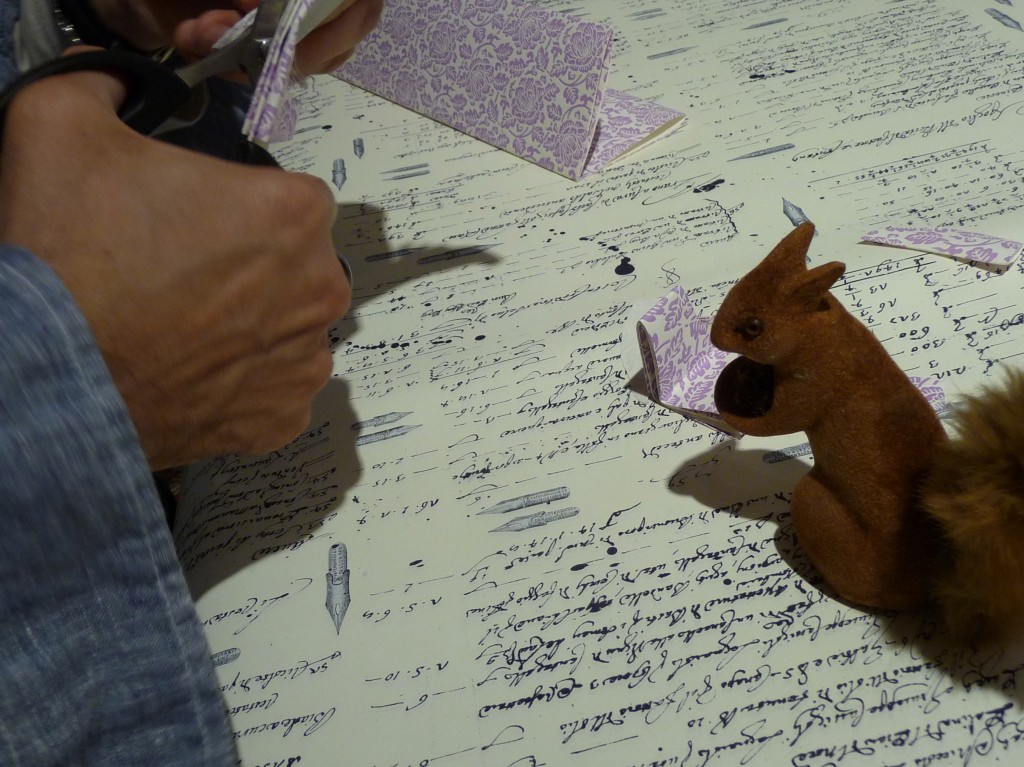 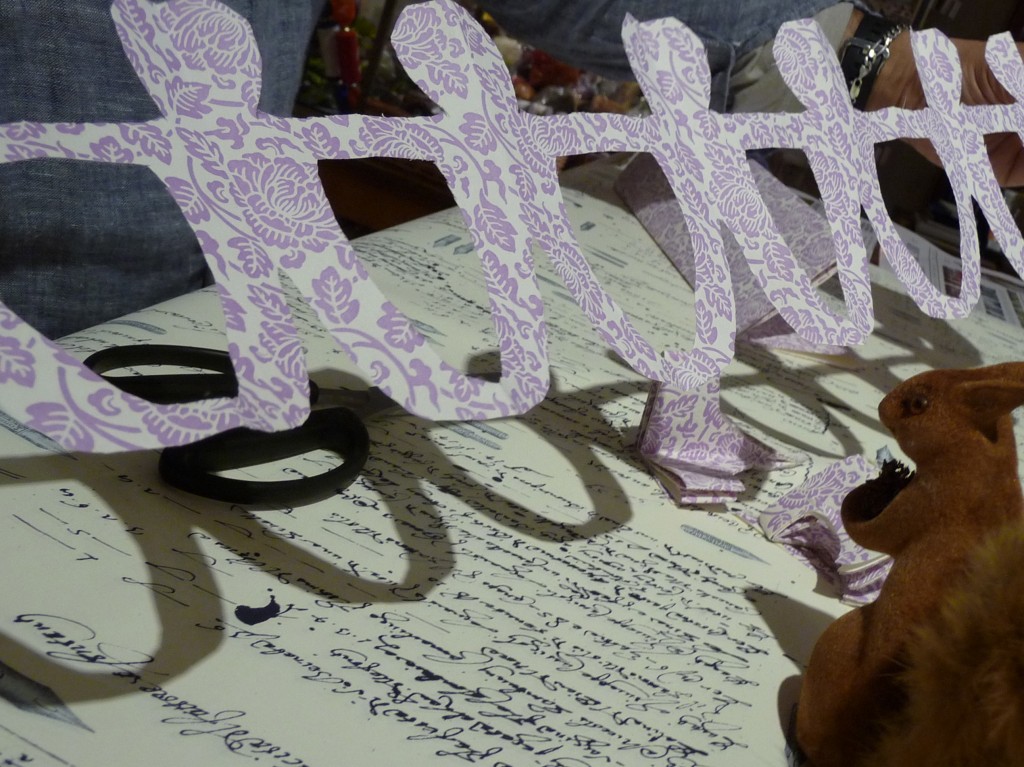 But it was a fun reminder of how this little space is so much more than a pen shop and ink shop, though it does boast one of the widest selections in our metropolitan area. 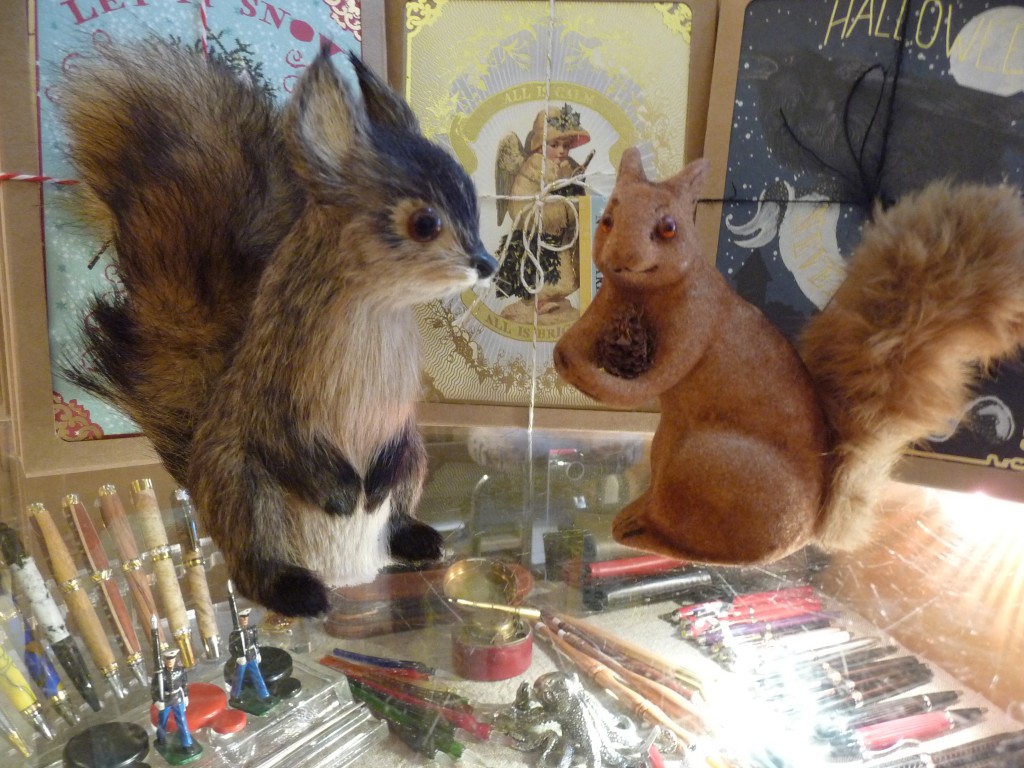 Adele was happy to make a new friend of her own ilk.  Imagine spending your days in this gorgeous playground of a place, I wouldn’t be surprised if Adele felt twinges of jealousy.

I headed upstairs to check out the fairly new gallery space and the classroom.  When I first began coming to the shoppe the wall along the stairs was lined with cuckoo clocks.  It was a lovely sight.  These days the cuckoos have mostly been replaced by a collection of marionettes and theater frames. 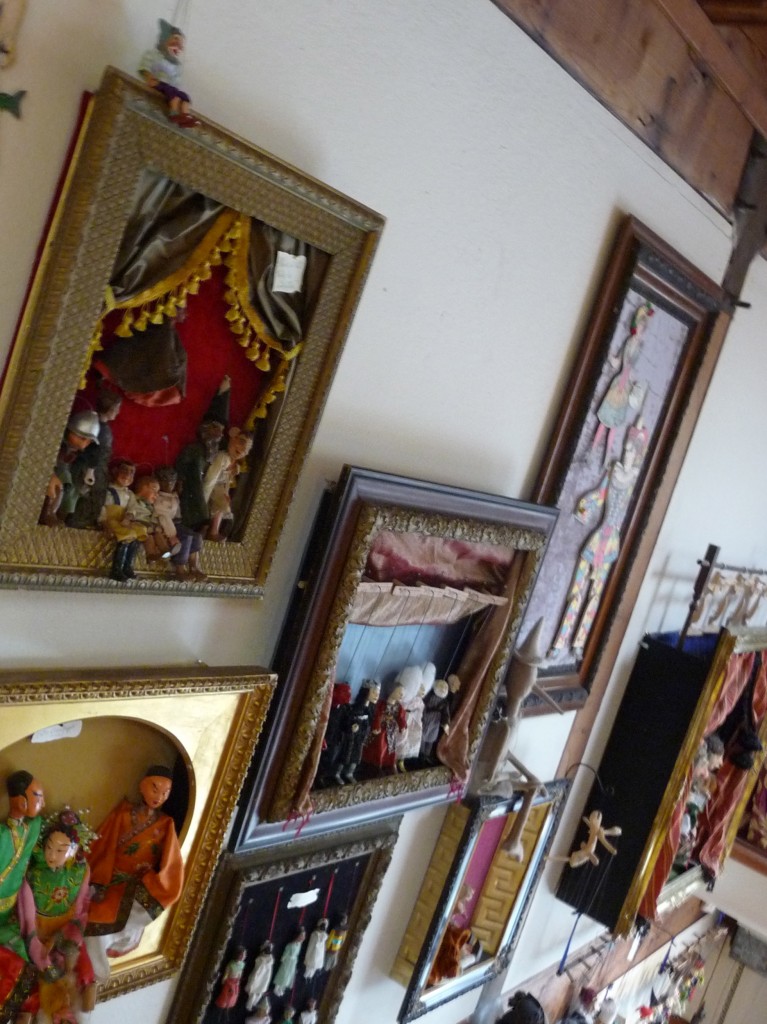 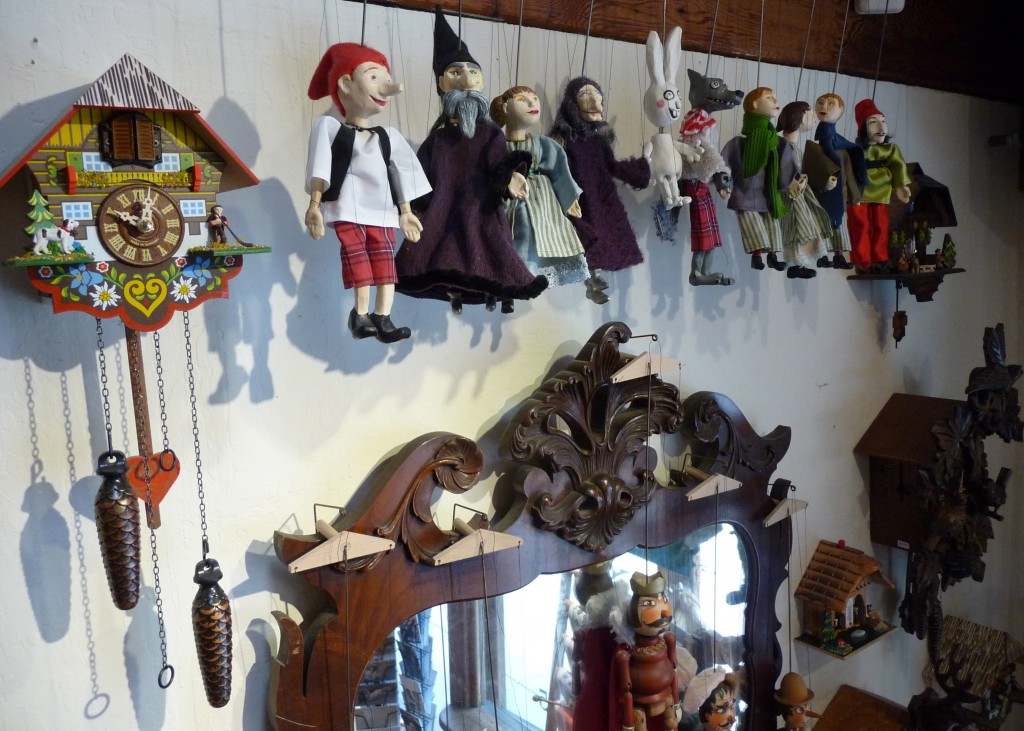 There was a painting class in session and they kindly let Adele and I have a peek. 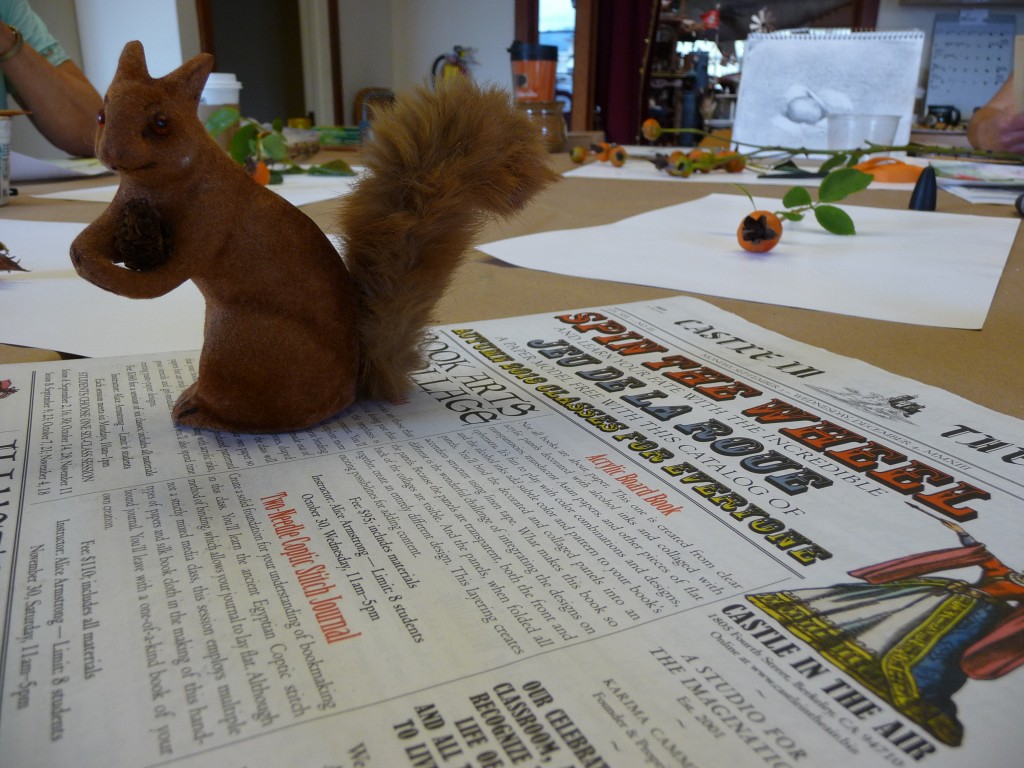 Adele is sitting upon the current class schedule which is always printed in the style of an old time newspaper. 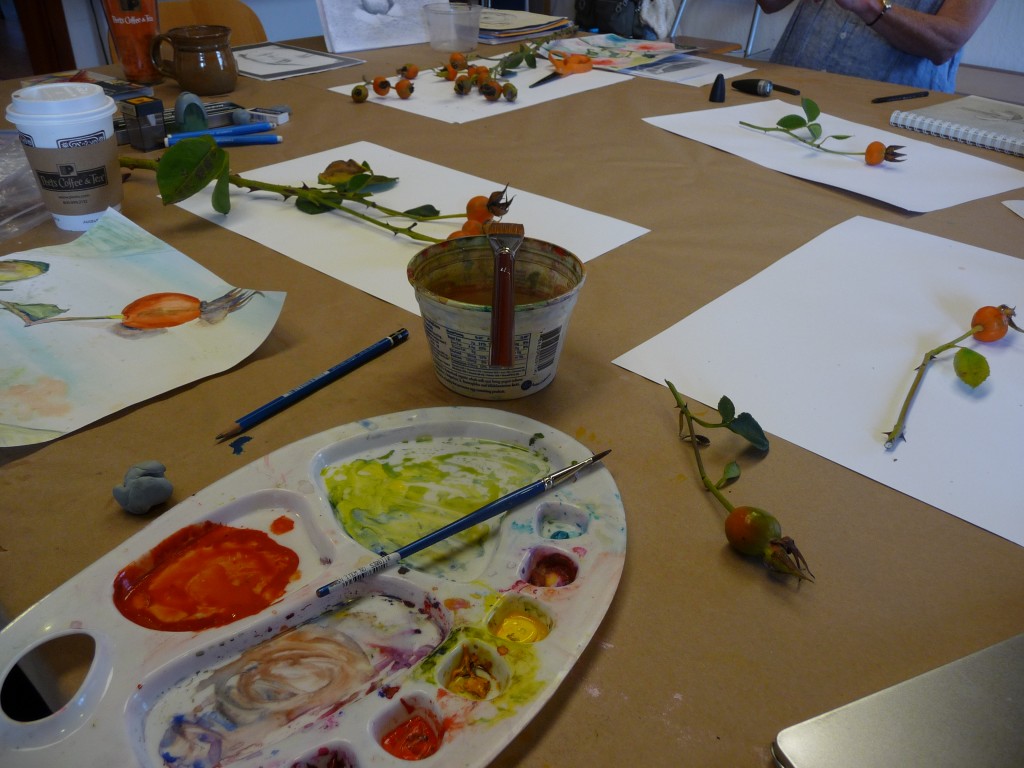 Which reminds me (how could I have nearly forgotten ?!) of the two painting classes that I took with Karima many moons ago.  Two years in a row, two days of painting and chatting.  Two slices of heaven.  I am enough of a novice that I am not particularly critical of my work so they grace our walls and I have the blessing of being frequently reminded of my watercolor dabblings. 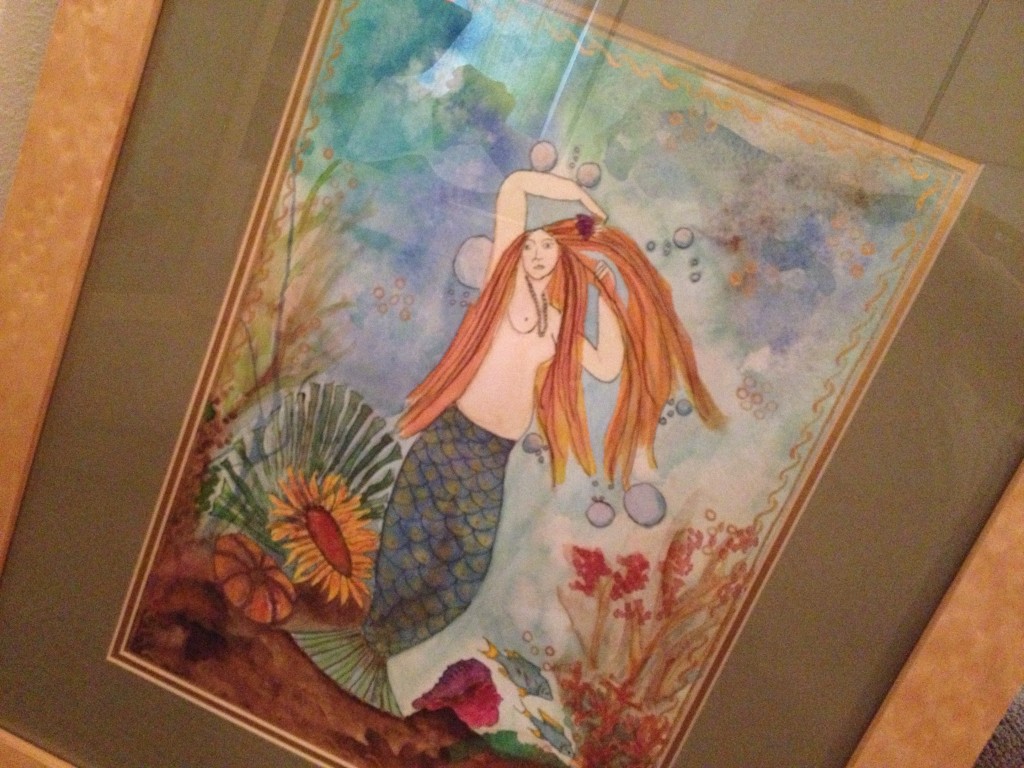 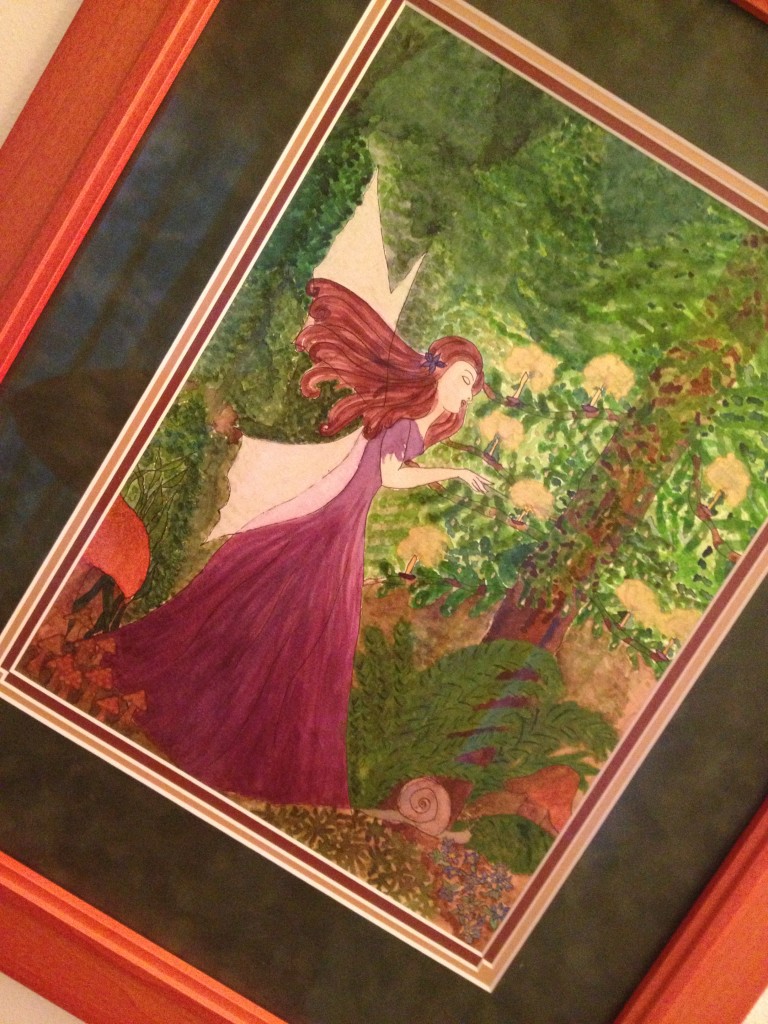 Here are some class samples.  Had I the resources, I’d follow their siren call and be perched at the table happily crafting quite regularly. 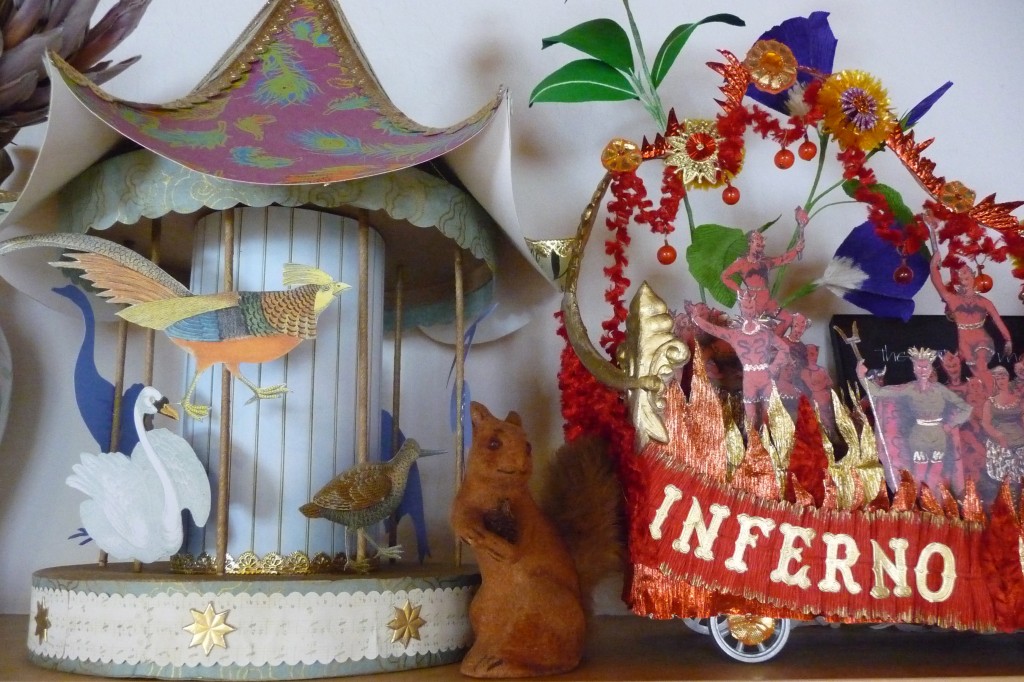 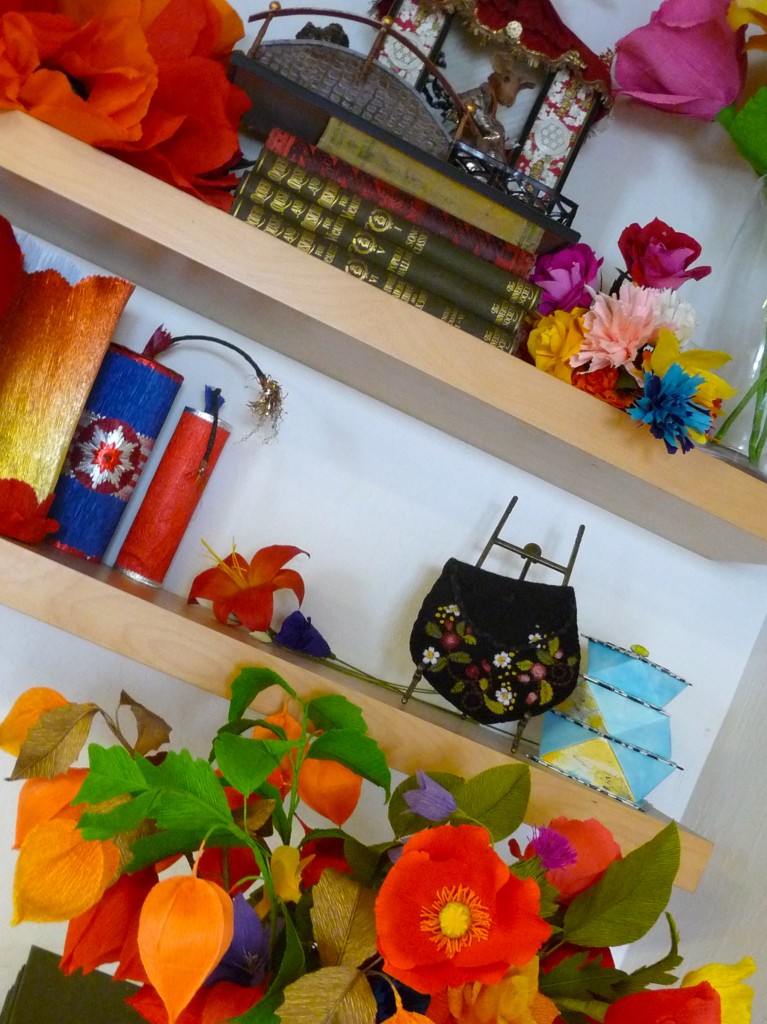 And finally, John showed us around the giant mouse house that he and Ulla Milbrath created over several months.  Ulla was another of my first teachers at Castle in the Air, but sadly all evidence of the class that I took with her is gone because we made greeting cards.  I absolutely loved the class and were I the sort of social lady who is expected to send regular correspondence, I would certainly have kept up the craft of making original cards using collage and pieces of ephemera.  But I’m not that sort of person.  (I suspect that my favorite part of that life would be making the cards anyway.) 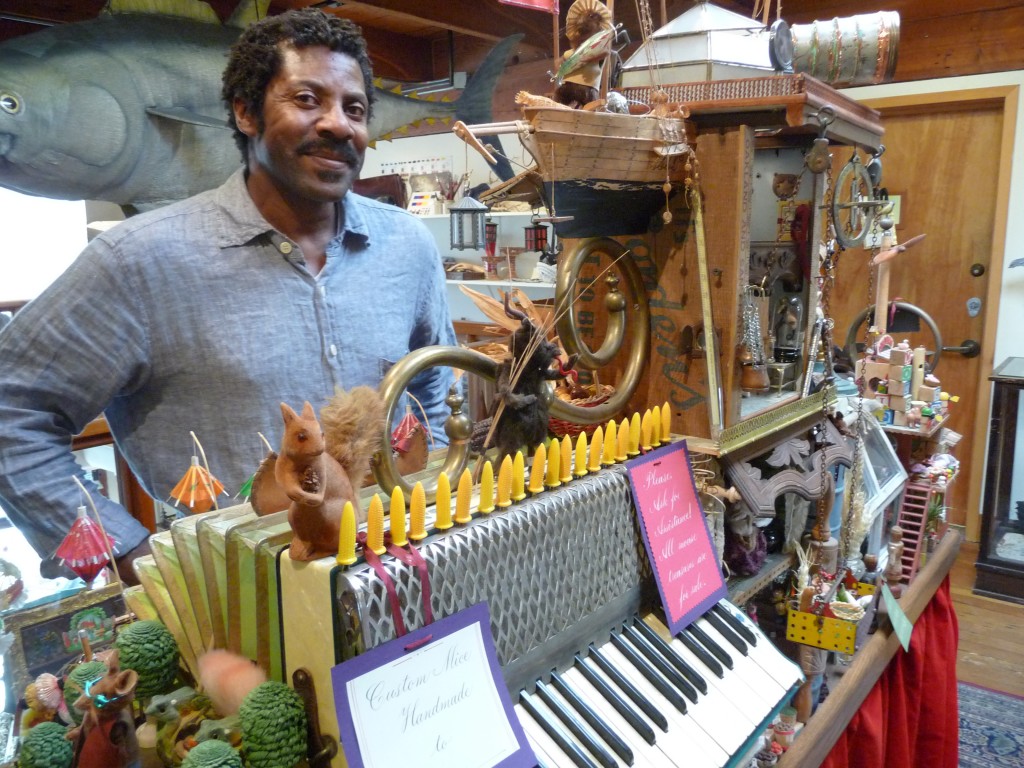 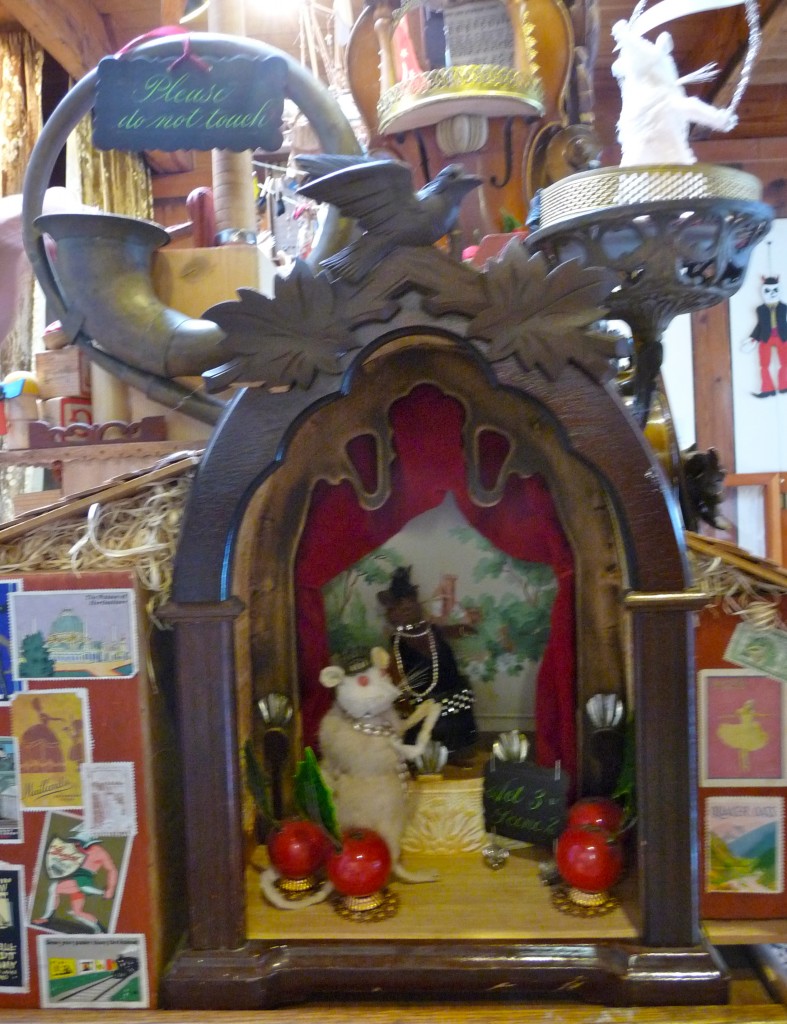 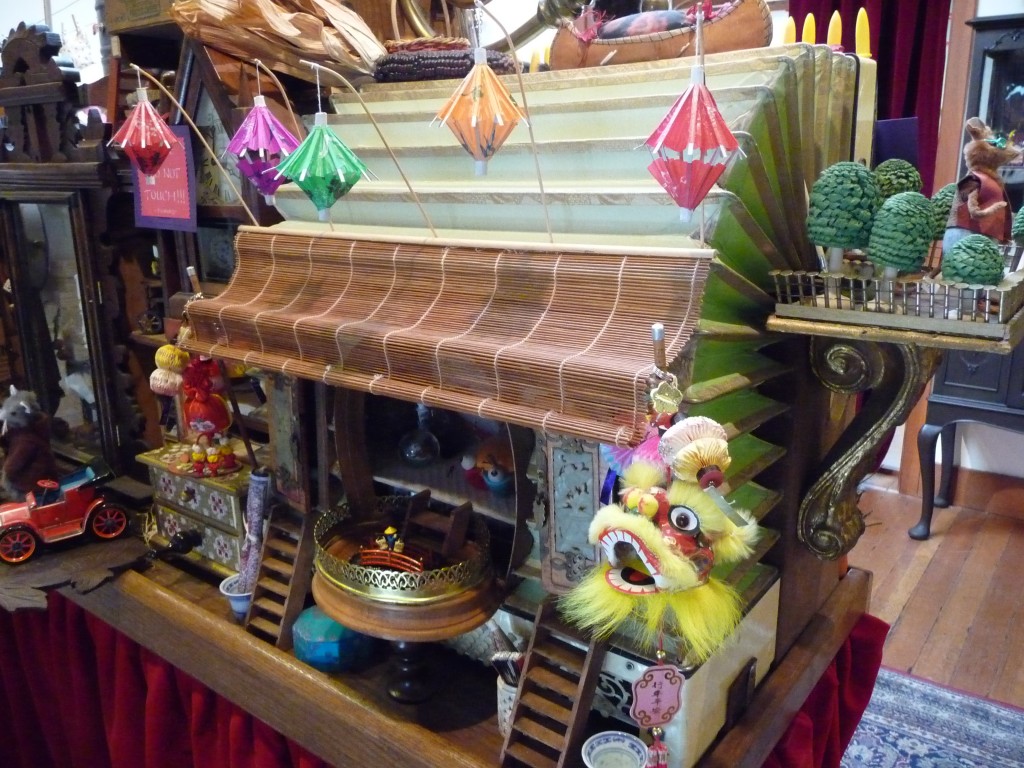 At one point, folks could make their own little house.  I think that Adele would overjoyed if I made one for her.  Maybe someday Adele… 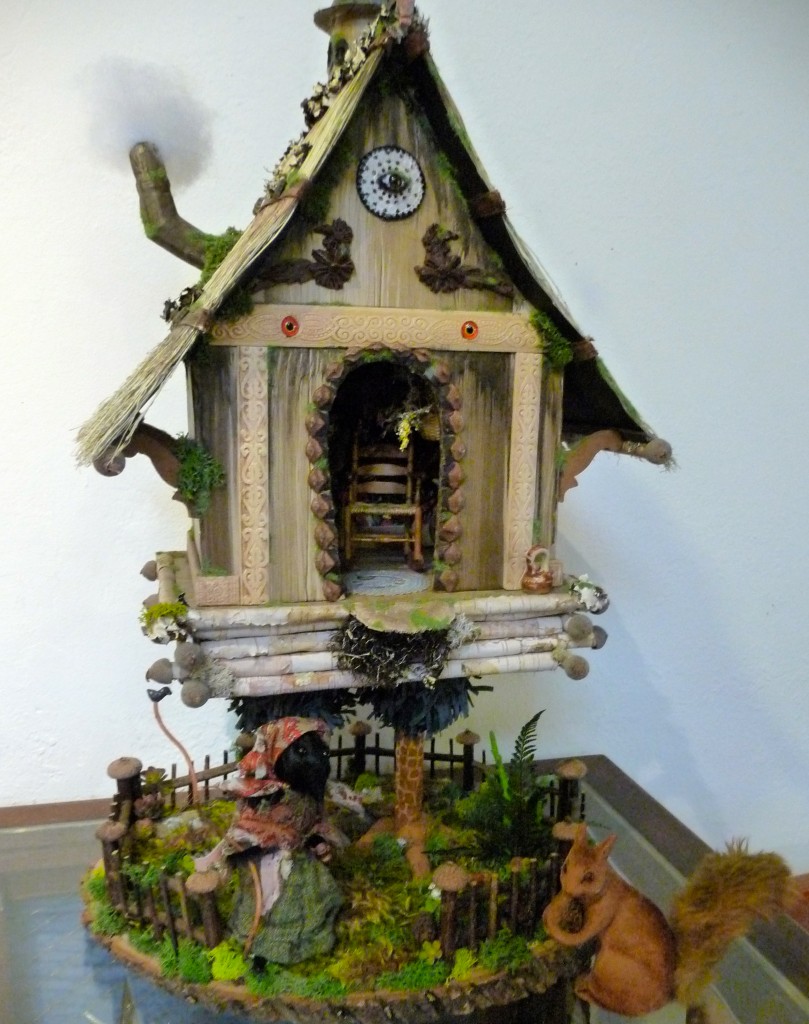 For now we’ll have to be content with the fantasy, our own castle in the air.  Two final pics of our visit follow.

The Shoppe from a squirrel’s eye view: 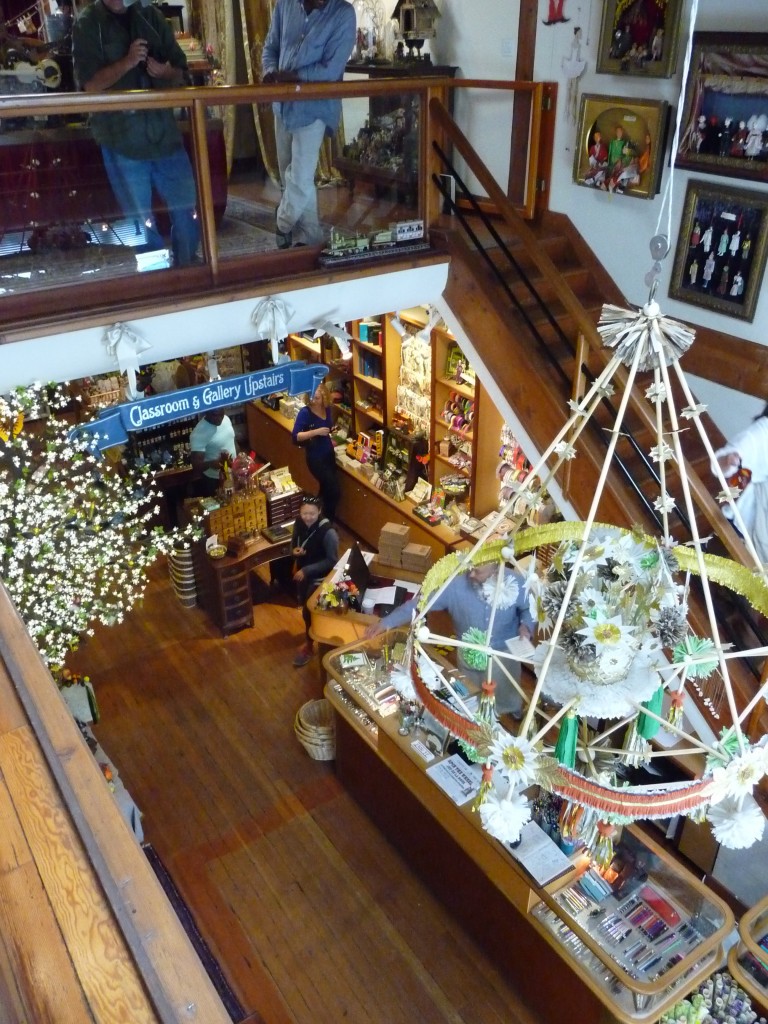 And dueling scissors just for fun!  (Apparently the best stapler is purchased at Castle in the Air, I’ve yet to take the plunge myself….) 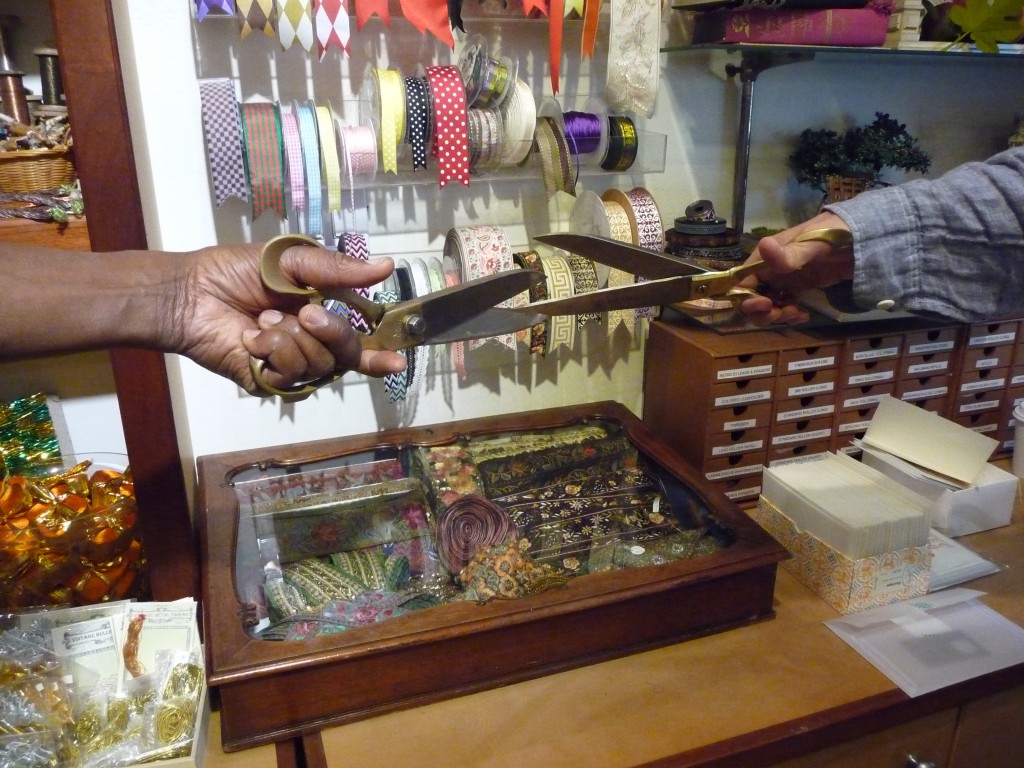 And now, enough fantasy.  Reality firmly beckons me.  Till next time, keep a little pocket of thy mind free for dreams.