Adele and I had a lovely outing on Sunday. We attended a tour of the kitchen at Three Stone Hearth and got to learn all about a favorite local business of mine.

“We heal our community, our planet, and ourselves by building a sustainable model for community-scale food preparation and processing that honors culinary traditions and provides nutrient-dense foods for local households and beyond” 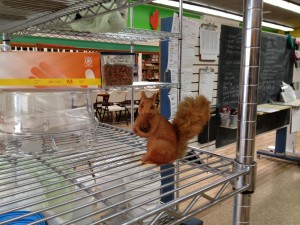 I could approach the project of sharing a bit about our excursion from so many different angles which is probably what I love most about TSH. It is such a holistically established business that no matter what way you begin to think and talk about it you soon arrive at the hearth, the very center where it all blends together. A business which truly serves all the people involved with it is such a beautiful thing to behold, it is inspiring on many levels. I read Full Moon Feast from cover to cover in preparation to meet with Jessica Prentice, and also gave a fair first pass to Sally Fallon’s tome, Nourishing Traditions in anticipation of our meeting. So, I’m currently quite inspired about what I’m eating. But I think that I’ll save that information for another post which will serve as a diet update.

So I won’t talk much about the food, except to say that TSH is providing many folks with very nutritious fare. Food that we would not be able to find anywhere else, save for preparing it ourselves. That, in and of itself, is a wonderful blessing for us all. In her presentation, Prentice made the point that at this stage in the life of TSH, the food is sort of a happy by-product of all the other work that goes on in their kitchen. I’d say that perhaps the food is the alpha and omega of TSH. While the food is truly the beginning in terms of conception, and the end on a weekly basis, it is all the other stuff that engages the workers of TSH on a heart level. Given the amazing knowledge and talent of all the co-owners, excellent food is a given, and the consistent rule. Given the intention behind their work and how they perform it, all sorts of other wonderful lessons are learned along the way. Personally, I have always felt blessed to do work that I truly love, that inspires me and teaches me every day that I do it. It would seem that the leaders of TSH are blessed to have a similar sort of experience. That’s probably part of why the food tastes so good. It all goes into the stew.

On our tour I learned that the logo for TSH is a Mayan hieroglyph for three stones set around a central fire, an arrangement used by countless tribes and cultures throughout history – It is the most universal hearth design on the planet. I should have known that there was something special and symbolic about the TSH name and symbol. Now that I do, the fullness of the work being done there is that much clearer to me and in turn I appreciate it so much more.

Ultimately, relationships drive the business of TSH. I’d venture to say that is always the case with small businesses, which is part of why I am such a fan. Small businesses are extensions of the people who work in them, which gives those folks all sorts of opportunities for personal growth. It is a beautiful thing. At TSH the helmspeople are really clued into that, which I appreciate. It is far easier to keep company with those who cultivate self-awareness both as a private and communal practice.

I would be remiss if I were to omit my experience reading Prentice’s amazing book. It is such a wonderful exploration of the personal within the context of the whole. Prentice shares with us a process which is characterized by equal parts mind, body and spirit. Not that the three are really separate, but I could not think of how else to make the point: the book is thorough, and inspirational, and practical. In a holistic venture, Prentice travels deep to the heart of what truly nourishes us. I loved the various sources that Prentice drew from; I loved that so many seemingly various topics were woven into an exploration of what we eat and how we feed ourselves; Mostly, I love that following my heart led me to read a book written by somebody who knows, above all else, that she must follow her heart. That seems like a good thing to remind myself in moments of despair: that somehow, someway, we each get to where we are meant to go, and along the way we meet some lovely people and learn what is good for us to know.

Prentice is also the person (among others, of course) behind this nifty wheel. I believe that it was after I read this book, that I had the idea to paint a very large circle with all the produce that we consume arranged around by order of the seasons. I figured that this would be ideal art for our kitchen wall – It would be beautiful and informative and would keep us on track toward my newfound resolve to eat with the seasons (this was before we joined our CSA program and long before TSH entered our lives). I’m pretty sure that I was also planning to include other elements of the natural seasons in there: the celtic holidays, the phases of the moon, those sorts of things. But, the project was far too big for me to tackle given my limited skills with a brush. A short time later, I was in a cute little local shop looking for a birthday gift and I saw the Local Foods Wheel. That pretty much put my idea to bed. It is always such a relief when an idea that I have comes into reality without me having anything to do with it! While it isn’t exactly the work of art that I was envisioning (I’ll bet that somewhere, somebody else is crafting up a stunning circle for kitchen art), it sure is practical and was just the thing for my health conscious friend.

In her talk, Prentice shared a story with us that has a nice way of illustrating what she told us about TSH and what I am now sharing here. (For more on how TSH came to be, take a half hour to watch this video. It’s a goodie.) The story goes that at the very first meeting with the five founders of TSH, Prentice put her cards on the table: she was only willing to go ahead with the idea of a CSK if they packaged the food they made in mason jars. Presumably, the other four were in agreement or acquiesced, because seven years later mason jars are a key component to the systems at TSH. Prentice’s point in telling the story was that what began as a simple expression of values around producing less waste ended up determining so many factors of how TSH does business. Packaging in glass necessitated systems unique to this new business – Systems that had to be invented and refined, which required a lot of work. (Hopefully the sort of toils that brought everybody involved closer together.) It turned out that using jars meant that from day one TSH had a built-in customer retention system. A small hook, sure. And perhaps really just a figurative one – because the food is really what keeps people coming back. Or maybe (probably), there is more to it. From day one customers paid a deposit for each jar used, and when the jars were returned their accounts were credited. While it may seem like a trifle, it turned out not to be. It turned out that using those jars, and keeping tabs on them, made for a lot of work and became the topic of many conversations and investigations into customer’s account tallies. And while those conversations may have been mundane in and of themselves, the relationships that grew out of them endured.

So it would seem that jars, ancient hieroglyphs, and inspirational books were our guides into the world of TSH with this recent visit. I have no doubt that others, exposed to our country’s first CSK for different reasons, arrive at very similar conclusions to my own.

A long time ago I studied T’ai Chi Chuan. (Funnily enough, I recently saw my teacher for the first time in many years at TSH and it turns out that our midwife, who introduced us to TSH in the first place is the daughter of a fellow student of mine in those classes many moons ago – this is part of what I meant when I said that I followed my heart to TSH.) During a week long intensive, we explored the five elements. I have never forgotten what my teacher said about the element of fire: that it binds people together; that when people create fire together, they linger on for hours afterwards, like the embers of a hearth. Our tour was like that – I watched as the others in attendance were reluctant to leave the hearth. They had learned so many wonderfully interesting things about this unique business and they wanted to know more. So it would seem that the hearth is burning strong in Berkeley, nourishing many of us in ways too numerous to say, but too deeply to go unacknowledged or under appreciated.