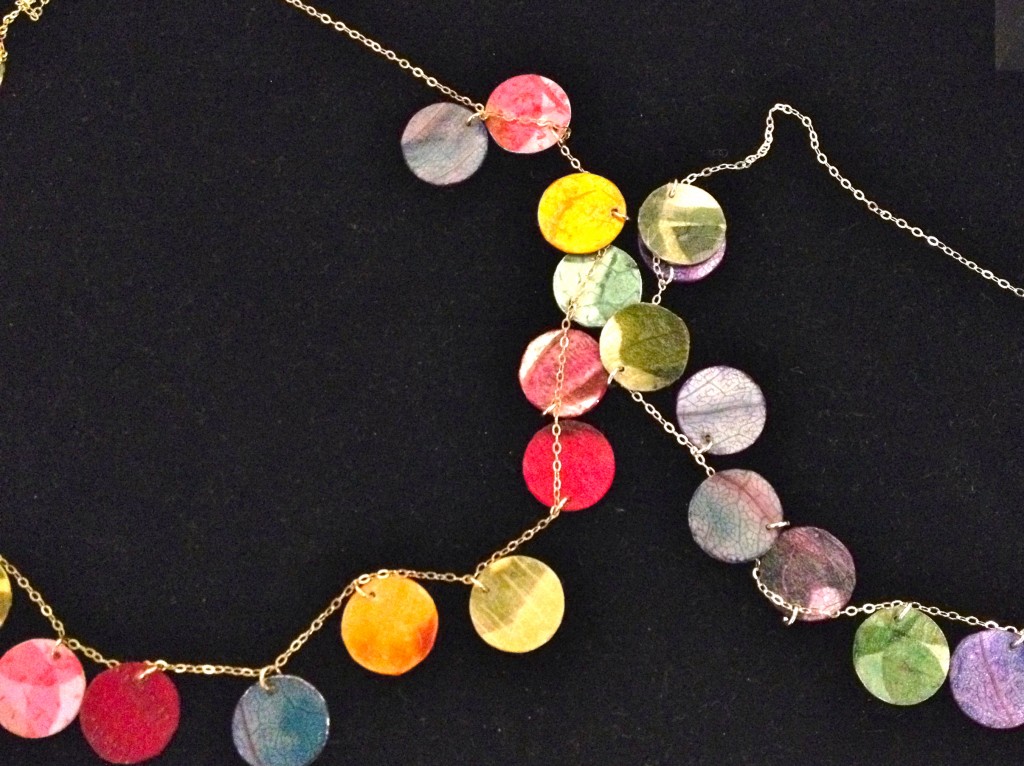 In other news, check out this gorgeous jewelry made out of fruits and veggies – amazing!

I’m surprising myself lately.  The first surprise occurred a little over a week ago when I posted a picture of my long hair.  Honestly it was partly because I’ve been advised that blog posts are better received when they have a picture, but there was another reason that I shared in the caption of the photo.  Namely, that I was about to do something momentous by getting a haircut.  Ironically, the thing of significance didn’t happen until a week later because I got the appointment time late by a half an hour and then our family car had a slight problem that rendered it immobile.  Even then, I had to persevere a bit more until I really struck gold.  Which sort of makes this all a bit more significant, because I’m remembering that hair is like that.  Especially curly / wavy hair.  In my years of experience dealing, or not dealing as the more often case is, with my hair I’ve learned that there is a brand of high maintenance that curly hair demands.  I’ve come to think that curly hair has something to teach us about being gentle and accepting of ourselves.  Indeed that is how I’ve learned to make peace with my hair.

The second surprise occurred when I realized that in spite of my general nonchalance, my head typically looks quite neglected to the point that I’ve become rather self-conscious about it, I was suddenly devoting quite a bit of attention to my hairstyle.  This is because I’d reached a point of extreme frustration with how my hair looks and I was becoming increasingly obsessive about getting my hair shorter and layered.  The funny thing is that nobody else seemed to think that this was a good idea.  I’m talking years here.  Years of playing with the idea of more layers and getting talked out of it by everybody.  Years!

After my haircut yesterday I was disappointed.  Yesterday was also meant to be our boy’s first-ever haircut with someone other than Mr. Twist, but he chickened out.  So we made a plan to go back today.  Somehow that second visit in the wake of my disappointment was enough to empower me to insist upon the change that I’ve been wanting for years.  Years!  The idea that if my boy had the opportunity to watch me get my hair cut, yesterday he’d been napping during my cut, perhaps he’d be more amenable to the idea of sitting in the chair himself was helpful when I pleaded my case to my hairdresser.

What finally convinced my hairdresser to give me layers?  I told her that I’d basically been hating my hair for several months and so it wouldn’t really be that big of a deal to hate my hair for a different reason.  In fact, a little variety would be welcome.  Essentially, I’d arrived at rock bottom.  Finally she agreed.  After years.  Years!

I got my layers, and I declared to my husband, another long time deterrent of the layers that became a mild obsession, that the layers are here to stay whether he likes them or not.  Because I like them.  I can’t believe how much I like them, I feel  like the guy who finally eats the green eggs and ham (except that I wasn’t the one pushing them away, I was just the one listening to the others who were encouraging me to push them away – somehow that seems like an important distinction to make).  Our boy also enjoyed his first haircut and has been talking about both our haircuts all evening.  Indeed it was something of a momentous occasion.

The third surprise is that for the first time in years I like the way my hair looks.  Now that I can honestly say that, I cannot believe that it took me so long to get here.  But strangely enough it seems all the more fabulous for all the effort that it took to get here.  Maybe there is something to be said for hitting rock bottom, sometimes.