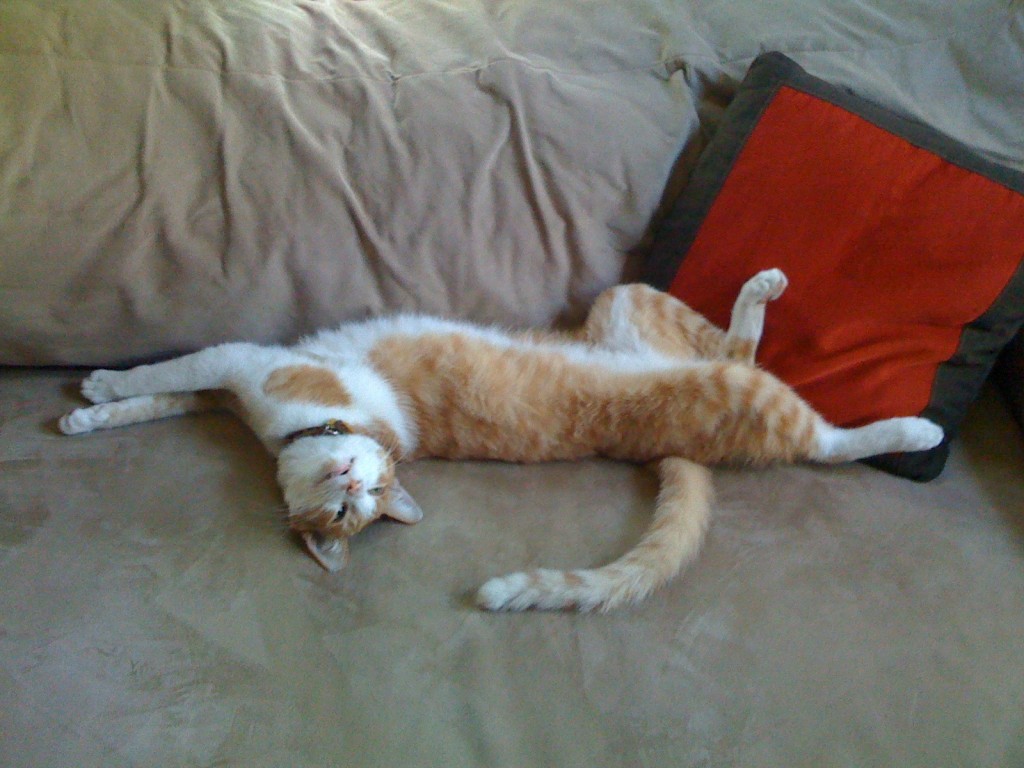 I read somewhere recently that Joe Pilates was often heard saying that there’s no stretching in Pilates.  This sounds so funny to me given that in my time Pilates was defined as Stretch, Strength, and Control.  Apparently his point was that the stretch is always part of a whole which included strength and control.  Okay, point taken.  But today, I’m inclined to focus on the stretch part of the definition.  Partly because it’s next on my list and partly because I’ve got a new project in the hopper and my thoughts on stretch have a lot to do with how it’s coming together.  But there I go getting ahead of myself again.  Today, stretch.

First, a little story:  there was a period in my training where I was doing a lot of pelvic tucking.  The point of this particular position, as I understood it for the brief time that I worked with it, was to create an opening in the low back and at the front of the hips.  And indeed, I did experience a sensation of the musculature in those areas opening and releasing – for a time.  I also experienced muscle spasms in my pelvic floor (thanks to my tailbone injury) and two massive spasms in my psoas and surrounding muscles that lasted for several weeks in each occurrence – not good.  During this period of pelvic tucking I was working diligently on balancing my asymmetries in my hips (yep tailbone injury strikes again).  Despite lots of cajoling and focusing and just plain trying my absolute hardest under the watchful eye of a teacher for whom I hold deep respect, I had no luck.  The muscles that didn’t fire couldn’t fire.

An alternative view on pelvic position was presented to me by another teacher for whom I have an equal amount of respect.  This view jived with the other material I was learning at the time (from Jay Grimes, this book, photos of Joe himself, this other book, this technique, etc) .  This view was based on a simple goal of creating space internally with the muscles engaging in a two-way stretch.  It proved to be the antidote to the consequences of all the tucking that I’d been doing and it gave me access to the entirety of my musculature like nothing else had before.  I was sold.

I’ve come to think of length first when it comes to Pilates because of this learning experience.  Time and again, with my own body and with the bodies of my clients, I see that more space gives access.  When we are compressed and condensed we are more likely to stay stuck.  When we create space within our bodies we also create an opportunity to find a more ideal skeletal alignment which gives our muscles the opportunity to activate.

What’s more, space is essential for movement (think of how little you move sitting between two people in the coach compartment of an airplane).  The two-way stretch creates space in our joints enabling them to actually articulate.  When we are compressed, the movements in the joints are significantly hampered, at least that’s what it feels like.  (Try jamming the fist of one hand in the palm of the other and moving them.  Then put a little space between them and see how they can articulate individually).  In the studio, I am often saying that the word for joint in Spanish is articulación.  It just seems to bring the point home.

So it would seem that without stretch, opportunities for strengthening would be significantly minimized.  And while we may experience a sense of control over a stable and tight body, without stretch we really don’t have access to its full capacity.  Come to think of it, I’ve talked myself into the idea that stretch might very well be the most important component to Pilates, sort of a gateway to the depths of the work.  (How ironic given Mr. Pilates’s assertion.)

Which brings me to one other point about stretch that I feel compelled to make even though this post is getting longer by the minute:  less is more.  In order to activate the two-way stretch, most of us are going to have to give up a fair amount of muscular engagement initially.  There is a controlled and deliberate release that is essential in Pilates.  That release gives way to a depth of engagement that is strengthening and empowering to the whole self.

Okay I think I’ve made my point.  Happy stretching!

2 thoughts on “Pilates is About….Stretch”