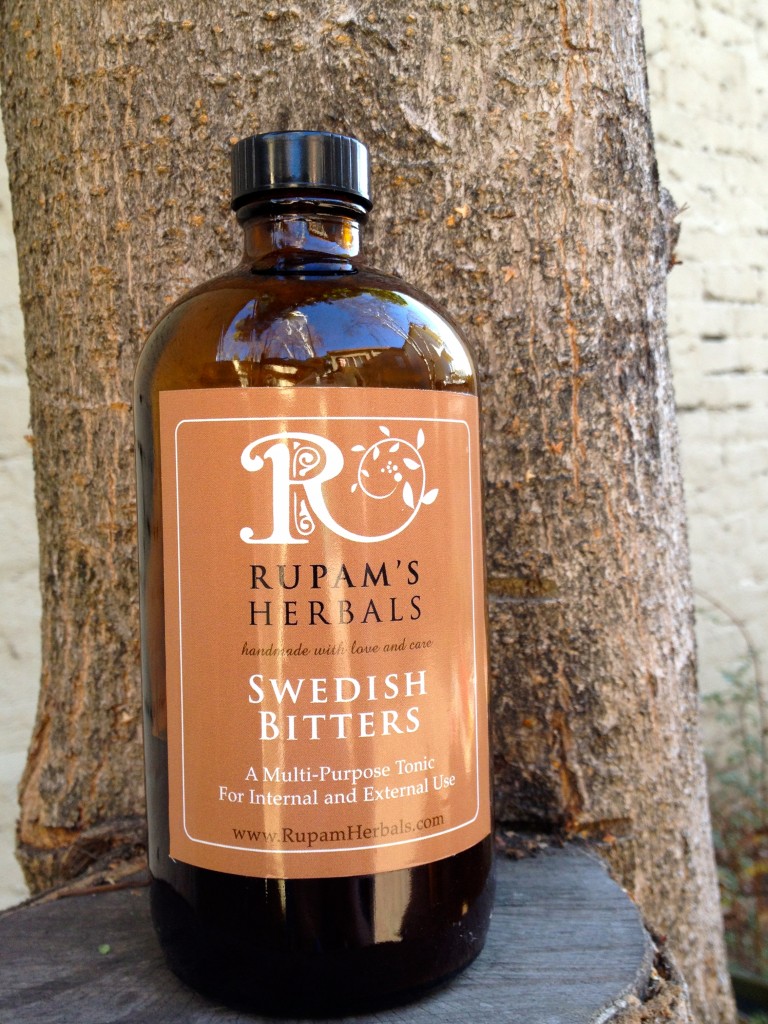 This is my second to last resolutions post for 2014.  I categorized it as such because I achieved some dramatic improvements in my day to day health with a twice daily cup of warm bitters.

I’m finally writing this post!  You see it’s been on the docket since November, but things just kept happening.  In getting to know Rupam Henry, I’ve become increasingly curious about her offerings.  I’m like this with self-care stuff, I get to know a practitioner and I become completely enamored.  Everybody falls for something right?  I fall for skin care products, body techniques, and herbal tinctures.  Back in the fall, I hatched the idea to give all Rupam’s a try and write about my experiences.

I’ve already written about her amazing, yes I really do mean A-MA-ZING, breast oil and tooth soap and together we decided that her Swedish Bitters were the obvious next step.  Bitters is a mainstay of what she offers.  And because of the things that were happening with my body.  Namely that I was beginning to have some symptoms of hormonal funny-business.  The idea was to start with her smallest bottle and see what happened.  I started when I had my NYC-in-twenty-four-hours-cold and I was pleased at how the bitters helped me with my symptoms.  It’s always a comfort to be able to do something when I don’t feel well, and even more of a salve when that something really seems to do some good.  Specifically, my cough was soothed by compresses and taking the bitters internally, and I found that helped me to sleep better.  I was on my way.

Once I’d recovered from my cold, I was feeling quite enthusiastic about the bitters and quickly upped my dosage to the more standard level – Rupam had recommended that I begin with a small amount because I am still nursing and it’s really best to take powerful medicine slowly and respectfully.  Given what I know of my tendencies around hormonal imbalance, I knew that taking bitters had the potential to help because they address the liver and the digestion.  Rupam, of course, corroborated this notion.  So I made a point of paying particular attention to the indicators that I am most familiar with and the symptoms that had been flaring up.  Mostly, I was sick of the pimples that popped up around my chin with ovulation and menstruation.  And sure enough, those have subsided almost completely since I’ve been taking the bitters.  When I do still get a hormonally related break-out it is significantly smaller and repairs itself much quicker than the ones that’s I’d been having before.  I know that this may seem like a small thing, but it’s big for my morale.  I really don’t like having pimples.

Things were looking good for a couple weeks.  I was sleeping through the night rather than having to wake in the wee hours to use the bathroom.  I had more energy and generally more motivation in the face of the day to day challenges that are commonplace for the small-business-owning-hands-on-mama that I am.  I was more resilient.  I was even enjoying some free entertainment in the form of creative dreams.  And I was pleasantly surprised to not experience nearly as much intestinal wind as I’d had previously – this was one of those things that I only noticed once it was no longer happening.

Another improvement that bears note, although I must confess that I believe that Rupam’s breast oil is a major contributing factor to this change, is that I haven’t had a case of mastitis since the fall.  My daily application of Lady Nada’s breast oil, along with the meditation that Rupam taught me paired with the liver support that the bitters gives me internally seems to have cleared mastitis from my slate.  I’ve come to understand that with me the cause of mastitis was always some stagnation in my breast tissues, usually too much pressure had been applied for too long, and it seemed that as the flow was slowing to a stop I’d suffer from mastitis more frequently.  I am so relieved to be free of that worry!

And then.  I told Rupam about all the good things that I was noticing.  She nodded and asked if I was noticing any irritability.  Upon her mention, I realized that yes, in spite of all those wonderful things, I had been operating with a rather short fuse.  From there, things seemed to get worse.  My next period was a doozy:  a serious case of PMS followed by a heavy flow that demanded a lot of attention.  At this point I realized that I was in the midst of some sort of liver clean up process and I was determined not to stop.  Somewhere in there, my husband noticed the notes that I was keeping about all this on the refrigerator and he mentioned that perhaps a heads-up would have been helpful.  Duly noted – because boy was I irritable for a spell!  Really irritable.

I started drinking Rupam’s daily tea too since it purports to work well with the bitters.  I was enthusiastic about the tea because now I felt that I was addressing my organs more completely with my kidneys and bladder both of which have gone through challenges what with the level of stress that I tend to maintain in my life and childbearing.  After only a couple months of drinking the tea regularly, I’m noticing more hair growth which is a real comfort since I’ve been frustrated by my thin hair for many years (my acupuncturist told me long ago that my kidneys were the cause of my thinning hair).

While I was in the midst of the seriously irritable stage of this introductory process (I’m guessing that it lasted somewhere between 4 and 6 weeks), it was all that I could do to hold on to my hat – my days were something of a wild ride.  And so I wasn’t too inclined to write about it all.  Hindsight is really the best view for some experiences.  Then the holidays happened and boy was I surprised at how much work goes into planning for a thirty-second nocturnal visit from a certain immortal.  Then my husband and I got flattened by a virus that keep us down for weeks.  Then it was the new year and business picked up in my studio.  And now it’s February.  I still take my bitters twice a day.  All the benefits of the bitters are still present and the liver clean up project seems to be done with – thank heavens!

Throughout my years of learning to understand and care for my body, I’ve used herbs often and yet I’ve maintained something of a subconscious bias toward physical methods.  My recent experience with Rupam’s bitters has opened up a whole new world to me and I’m so very grateful for the support that they offer me.  Life certainly is better with Bitters!