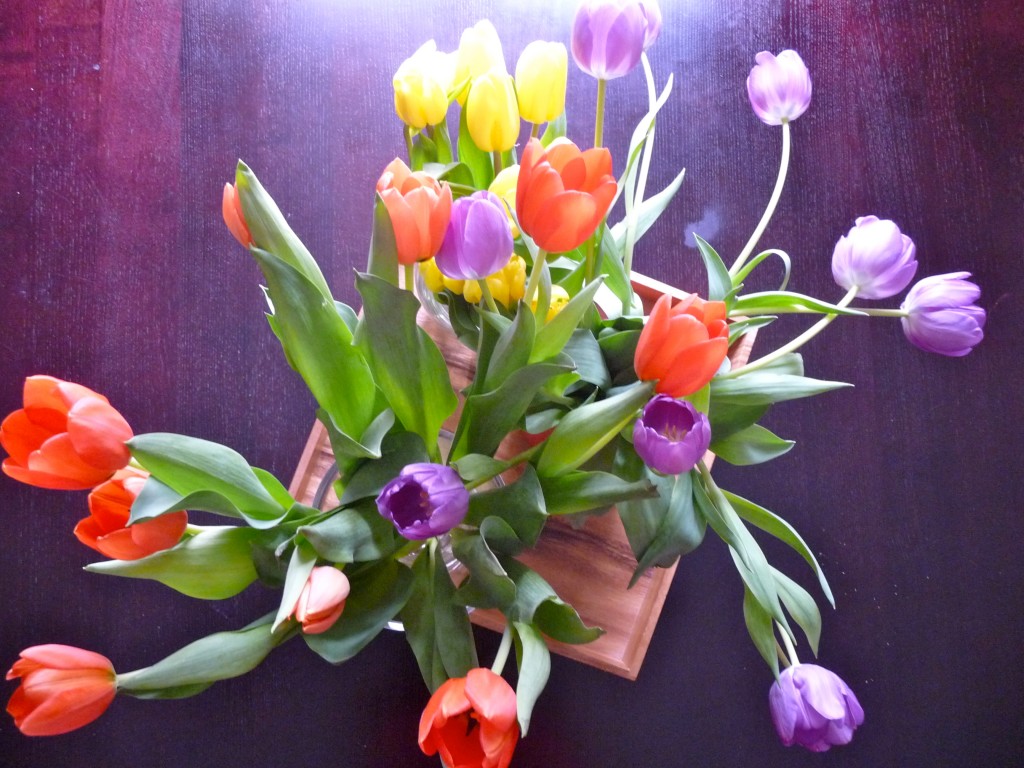 tulips reaching for the light

80% of Life is Just Showing up – Woody Allen

Remember that video that I promised?  Here it is.  I will confess that I do not at all like seeing myself on screen.  All those postural imperfections, mannerisms, and flubbits in glaring clarity.  But sharing is caring, and I do care to share.  So there, self.  There.  I’ve made it something of a personal goal to improve upon those things that I don’t like about looking at myself in videos, it is one way that I plan to show up to myself in the months to come.  Because, I do have some more video ideas to manifest and aren’t they sort of an ideal way to see just how we show up in physical form?  I do believe so.

Showing up seems like something of a theme in our home in recent hours.  It started with our nanny not calling, not coming, not responding to her subsequent termination.  In more than one sense, she failed to show up.  Perhaps her mostly – she’s always been slightly unreliable but it’s not too easy to find childcare for a 8-noon shift on Sunday mornings – uncharacteristic behavior can be attributed to the start of DST, but unfortunately it makes us all the less sympathetic to whatever may be her side of the story.  Try as I am, I can only get to the point of having lost a majority of my respect for her.  I’m offended that she was so disrespectful in her method of quitting, that she left us to do the “dirty work” of ending the relationship.  And now I’m here holding the bad feelings too.  So I continue to work on it because I’m pretty sure that right now I’ve got double the load, hers and mine.  Apparently this current situation reveals something of a cultural thing.  In some places it is considered acceptable to terminate one’s term of employment with nary a word of communication.  Point taken.

I must confess that I have my own history of not showing up to my personal preferences with respect to work.  As it’s virtually impossible to erase any of our experiences completely, I must still have some remnants of an old complex around leaving, something of a reverse abandonment complex.  Back in my early twenties, I was ready to leave my waitressing job, but I had an irrational fear that when I gave the standard two weeks notice I’d be instantly terminated.  So I arranged to have all my shifts covered for two weeks and then I gave notice.  Strange, eh?  I eventually came to terms with my error in judgement and lack of consideration and apologized to my manager.  She was gracious, but explained to me precisely the pickle that my actions had put her in.  Clearly I did wrong, but I feel that I did my best to take responsibility for my negligence.  In some way, if only retrospectively, I showed up.

There’s no two ways about it, breaking up is hard to do.  But I believe that it’s worth doing with as much respect for all the people involved as possible, and that requires showing up.  Saying goodbye in person.  Facing oneself in the face of another.  Being an employer forces me to do my best to do those things, that are in no way easy for me to do.  Perhaps that is why I’m an employer, because I need to be forced to show up in order to do so.

This weekend I had an enlightening Holistic Biomechanics lesson in which I sensed my tailbone in a whole new way.  I felt so many amazingly alive sensations at the very base of my spine and afterward I felt a kind of relief that I have not had in decades.  Apart from being an exciting discovery process, it was also trying.  I noticed myself becoming impatient and irritable more than ever before in a HB class.  I had the idea that perhaps those emotions relate to the very base of the spine, indeed I’ve often noticed a correlation between the length of my fuse and the amount of discomfort that I’m experiencing in my pelvic floor.  Because I was supported in showing up to my body, I was able to work through and hopefully work out some of those emotions.  Now I’ve got more ways to tune into my tailbone and will be doing so in the coming weeks.  The prospect of truly releasing the old injury, as much as is possible, is a powerful motivator.

In my work with clients, I am the one who keeps them company when they show up to themselves, that is what they are essentially doing when they arrive at my studio.  Often, people are finally showing up to parts of themselves that they have ignored for many years.  It is incredible to witness the relief that comes from addressing those long-ignored parts of ourselves.  I get eager for more.  So much so that I have to refrain from pushing rivers.

But sometimes, I can’t keep my words to myself.  Here we are again, Daylight Savings Time has arrived and I’m gonna beat the drum of discontent.  I’m gonna proclaim:  That DST! That DST! I do not like that DST! (did you catch the Seuss reference?  I hope so!)  I’m even gonna go so far as to say that if more people were showing up to themselves regularly, we would not stand for such silliness as changing the hour twice a year.  I know, I know, people like more light at certain times of the day, work / play schedules blah blah blah.  I don’t care about that stuff.  I care about the fact that I feel like crap for a couple weeks two times a year.  I care that in the years when I was more vulnerable I would routinely get sick every spring forward.  I think that I care because I show up to myself enough to notice the effects of the time change on my body.  On this point I’m quite certain.  And I’m gonna keep banging this drum because I figure that after years of showing up to my twice-yearly frustration maybe others will see my point.  Maybe something will change for the better, maybe the saying will be proven right.  If I don’t keep showing up, I”ll never know.

4 thoughts on “Thoughts On Showing Up”